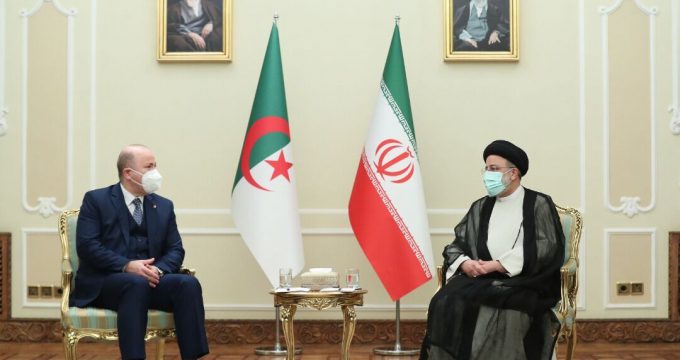 Raisi: Algerians reminder of resistance against influence of foreigners

President Ebrahim Raisi in a meeting with Algerian Prime Minister Aymen Benabderrahmane on Thursday said that Algerian men and women have always been and are reminder of the will and spirit of standing up and resisting against the influence of foreigners.

Referring to the Iran-Algeria friendly and constructive relations after the victory of the Islamic Revolution, Raisi said that the priority in the foreign policy of his government is to develop relations with neighbors and Islamic countries.

He noted that the will of the Islamic Republic of Iran is to expand ties with Algeria, and improving the level of bilateral relations should be a stage for strengthening the relations and cooperation of the two states in the international arena.

Benabderrahmane, for his part, said that Algeria has given more than 1.5 million martyrs in the fight against colonialism, and therefore its foreign policy is based on defending the right of oppressed nations.

Their challenge today is to overcome economic problems and to try to develop economic relations is the basis of their interest in expanding relations with the Islamic Republic of Iran, he noted.

He was officially received by Iranian authorities at Mehrabad International Airport.

Ebrahim Raisi will be sworn in as president of the Islamic Republic of Iran at the parliament at 17:00 local time.

On Friday, June 18, the 13th presidential election was held simultaneous with the sixth round of city and village councils elections, the first mid-term for the 11th parliament’s by-election, and the second mid-term for the fifth Assembly of Experts election.

Out of over 59.3 million eligible voters in the presidential election, nearly 29 million took part in the national event. Ebrahim Raisi won the presidential race with over 18 million votes out of the total 28,933,004 ballots, which shows a 48.8 percent turnout.

Supreme Leader of the Islamic Revolution Ayatollah Seyyed Ali Khamenei on Tuesday endorsed the decree of Ebrahim Raisi as the new President of Iran.