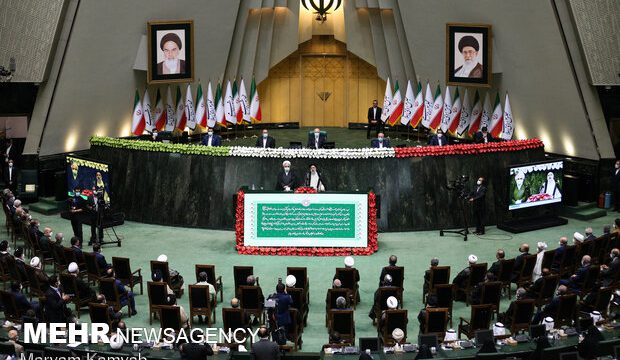 Iran’s new President said in a swearing-in ceremony on Thursday that the incumbent government elected by the nation will stand up for the interests of the people and bring about justice, and that the new government will support any diplomatic effort or plan to help remove the sanctions.

President Raisi made the remarks after being sworn in in the ceremony, adding that the 13th government is the government of people, welfare, and national unity.

Iran supports any diplomatic plans to remove the imposed sanctions, he said.

He underlined that Iranians have repeatedly shown they are loyal to the Islamic Revolution.

The policy of pressure and sanctions will not exclude the Iranians from pursuing their legal rights, including the right to development, he underscored.

The Iranian president further said that the power of the Islamic Republic of Iran in the region is security-making.

“Iran’s regional capacities support peace and stability in countries and are used solely to counter the threat of hegemonic and ruthless powers,” he added.

President Raisi called for resolving the regional crises through intra-regional dialogue and on the basis of securing the rights of nations.

“The involvement of outsiders in the region does not solve the problem, he said, noting that their meddling is the problem itself,” he further stated.

Recalling a fatwa by Supreme Leader of the Islamic Revolution Ayatollah Seyed Ali Khamenei, he pointed out that Iran considers resorting to nuclear arms as forbidden, best known as haram in Islamic terms.

The nuclear arms have no rule in defense strategies of the country, he further noted.

“I extend friendship and brotherhood hand to all regional states, particularly neighbors, and warmly shake their hands,” he said.

He termed promoting relations with neighboring countries as the most important priority of his foreign policy, calling for the dignity of the neighbors and bolstering ties with them.

Raisi took the oath of office before parliament in the presence of the Judiciary chief and members of the Expediency Council and foreign guests in Tehran on Thursday.