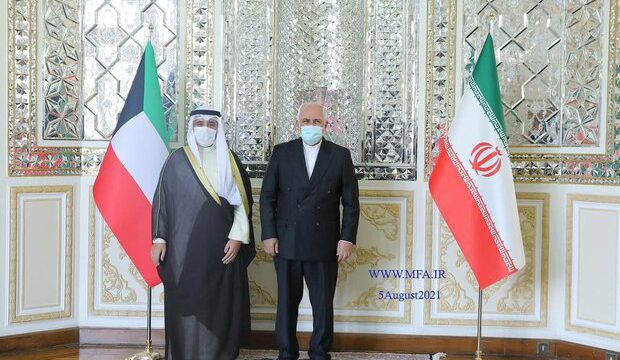 Iranian Foreign Minister Mohammad Javad Zarif held a meeting in Tehran with his Kuwaiti counterpart to discuss bilateral relations and the latest status of regional issues as well as the other issues of mutual interest.

The two top diplomats discussed bilateral relations and the latest status of regional issues as well as the other issues of mutual interest.

Congratulating the election of President Ebrahim Raeisi, the Kuwaiti Foreign Minister reiterated his country’s determination to expand relations and called for further consultations between the two countries on regional and international issues.

Sheikh Ahmad Nasser Al-Mohammad Al-Sabah pointed to Zarif’s 8-year efforts at the top of Iran’s ministry of foreign affairs and described as important the initiatives proposed by the Islamic Republic of Iran for regional cooperation in the Persian Gulf.

Zarif, for his part, praised the respectful, friendly and close relations between Iran and Kuwait, while reviewing the extensive efforts made to improve relations between them, and the continuation and promotion of these efforts under President Raeisi within the framework of the Islamic Republic of Iran’s definite policy to expand relations with neighbors.