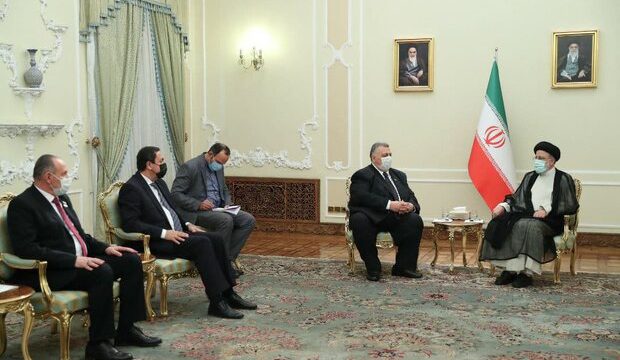 President Ebrahim Raeisi told Speaker of the Syrian Parliament Hammouda Sabbagh that the remaining foreign troops in Syria must leave the country immediately so that the nation can reconstruct their country.

President Ebrahim Raeisi received the visiting Speaker of the Syrian Parliament Hammouda Sabbagh for a meeting in Tehran on Wednesday.

Raeisi said in the meeting, “The Syrian people and government heroically resisted the Hebrew and Western terrorism and have won.”

Emphasizing the development of political and economic relations between Tehran and Damascus is in the interests of the two nations, the president said, “We will continue the strong company and cooperation between the two countries and there are no restrictions on the development of brotherly relations between the two countries.”

Regarding the planning for the reconstruction of Syria, the Iranian president stated, “The remnants of foreign forces must be removed from the territory of Syria as soon as possible so that this nation can begin the process of reconstruction vigorously and fast.”

Speaker of the Syrian Parliament Hammouda Sabbagh, for his part, said, “The Syrian people and government will never forget the support of the Iranian people, and the memory of Martyr Haj Qassem will be immortal and he will be remembered by the Syrian people.”

Stating that Iran and Syria share the same future, Sabbagh said, “The blood of the Syrian and Iranian people are mixed together and the bonds between the two nations are inseparable.”