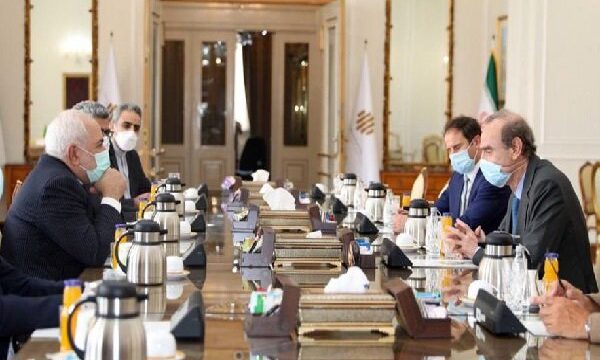 Iran’s Foreign Minister Mohammad Javad Zarif urged the European Union to not follow policies against Iran that are based on pressure and threats.

He made the remarks in a Wednesday meeting with the visiting Enrique Mora, Deputy Secretary-General of the European Union, who has arrived in Tehran this morning to take part in the inauguration ceremony of President Raeisi.

Considering Mora’s responsibility as the coordinator of the talks recent talks in Vienna aimed at reviving the JCPOA, the sides also discussed the latest developments on the issue.

Zarif elaborated on the stances of the Islamic Republic of Iran about the nuclear issue and pointed to the challenges ahead of the talks.

In the meeting, Zarif criticized the stances of the E3 (France, Germany, UK) regarding the Iranian nuclear issue and their failure for living up to their commitments in recent years after the US withdrew from the JCPOA. The Iranian minister called on the European countries to pay more attention to the realities on the ground and to not follow policies that are based on pressure and threat.

The EU official had already held a meeting with Iranian Deputy Foreign Minister for Political Affairs Abbas Araghchi on Wednesday.