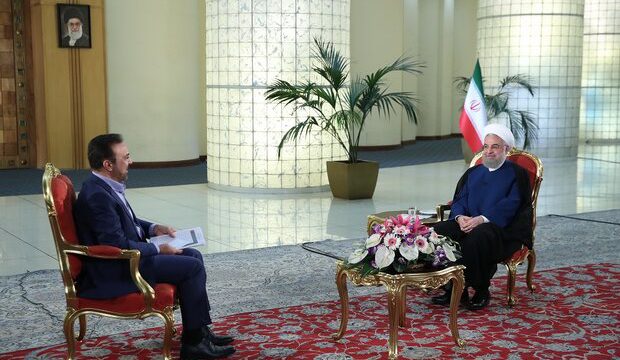 Outgoing president Hassan Rouhani says reaching an agreement on Iran’s nuclear issues is not out of reach.

He made the remarks on Monday evening in his last televised interview.

Regarding the question of whether there is still opportunity for an agreement, he said, “I believe yes, absolutely. Because If Supreme Leader’s remarks are our yardstick, it is possible to reach an agreement. He said that the sanctions must be lifted and we need to verify that, then we can live up to all our commitments.”

“The reason I ran for the presidency in 2013 was because I believed that the complications over Iran’s nuclear program could be resolved through negotiations, and that what I had promised to untie the knots through negotiation came true,” Rouhani said, his official press service reported.

He said, “This is what Mr Hollande (the then President of France) said during my visit to Paris in 2015, and said in a press conference that in 2013 we, the P5+1, the six countries, had made a firm decision to go to war with Iran”.

“He told me this in formal negotiations. He said that we were determined to go to war and when you came and announced that you were ready for negotiations, we gave up the decision of war,” he said.

Regarding the result of negotiations, the President said, “In the first 90 days, we reached an interim agreement, which was to reduce our oil supply by 20 percent every few months, was stopped, saying that the one million barrels of oil that Iran sells would not be reduced. In the second agreement, they agreed that Iran should have the base of nuclear technology. Third, the Iranian blocked properties were gradually released, that is, every month $700 million of the country’s blocked money was released.”

“I do not want to say that the commitments that the world made were fulfilled exactly and 100%. These commitments may have been 80, 70% fulfilled. But what I promised the people that I would untie this knot through diplomacy instead of war, this knot was untied and conditions were created in which the investors poured their capital into Iran.”

“In the twelfth government, someone took office in the United States who declared in his election campaign that the Joint Comprehensive Plan of Action (JCPOA) was the worst deal for the United States, and if he won the election, he did not explicitly say that he would leave the deal, but said that he would destroy the agreement and modify it.”

“When we negotiate, it is not just a matter of governments, we may agree with governments, governments act to some extent, I do not say 100%, say 70. But regarding the sanctions and in the economic issues, corporations and banks are more influential than governments. Banks and corporations need assurance to make sure that their investment in Iran is not lost.”

“One of the arguments we had with the Americans in 2014 was that they wanted to include the region and the missile issue in the same talks, and we stood up and said no. When we tell the world that we will only talk on the nuclear issue, we must also accept the limitations of the outcome.”

“The resolution passed by parliament was one of the main obstacles to resolving negotiations with the P5+1, or the P4+1 plus the United States, in which they demanded that all sanctions should be lifted. Article 7 states that all sanctions, including those related to human rights, missiles, terrorism must be lifted first. Yes, all these sanctions can be lifted, but it requires more negotiations and another opportunity and time.”

“Our Discussion right now, both in 2013 when we promised the people and today, is that the agreement today is not out of reach.”

“The nuclear sanctions are the same ones that have been lifted, albeit in the agreement reached in the JCPOA itself. The president of the United States has a number of powers and he acts based on them. There is also some power for Congress, which actually suspends it, that is, suspends it for 4 to 6 months. It was based on this, if we wanted to not accept this basis in the JCPOA, our agreement with the United States would go to Congress, that is, it would go to the Senate and the House of Representatives and would not be approved in those conditions, which I believe is very very hard to be approved in today’s conditions. So whether you say the future is bright or not depends on what our expectations are”.

“If our expectation is that our relations with the world should be completely normal and without any sanctions, including with the United States, it wants a wider field for negotiations, but if it is only in the nuclear sector, we can now use the same framework set by the Supreme Leader to reach an agreement.”

“During the six rounds of talks in Vienna, we almost reached a framework, which is stated in the Foreign Ministry’s letter to Parliament. That is, on July 14 this year, the Ministry of Foreign Affairs sent a report to the Islamic Consultative Assembly, in which the report fully states what the P5 + 1 will do and what we will do. If this is the framework, it will be the vision we will have for the future.”