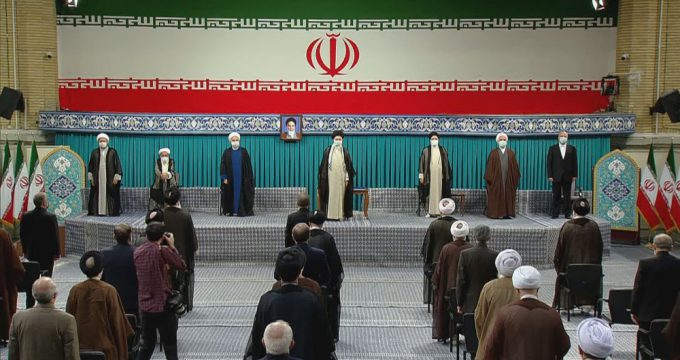 Ebrahim Raeisi is now officially the 8th president of the Islamic Republic of Iran after his mandate was endorsed by Leader of the Islamic Revolution Ayatollah Seyyed Ali Khamenei at a ceremony in Tehran, weeks after the ex-Judiciary chief won the country’s 13th presidential election by a landslide.

Ayatollah Khamenei’s decree, endorsing the presidential mandate of Raeisi, was read out at the event by the head of the leader’s office.

Right now, the leader is addressing the ceremony.

Earlier, President Raeisi delivered a speech at the event.

The ceremony is underway at Imam Khomeini Hosseiniyeh in Tehran in full compliance with COVID safety protocols and is being attended by the country’s senior state and military officials.

Press TV is providing a live coverage of the event. You can tune in to our Twitter account to watch it live:

At the start of the ceremony, Minister of Interior Abdolreza Rahmani-Fazli presented a report on the June 18 presidential election, which saw Raeisi emerge as the winner.

Airports in Tehran will remain closed for two and a half hours, and traffic restrictions will be in place on the streets near the venue of the ceremony on Tuesday, the capital’s Traffic Police has announced.

Raeisi, the eighth president of the Islamic Republic of Iran, won almost 62 percent of the votes in the June 18 presidential election and will succeed President Hassan Rouhani, who served two four-year terms in office.

Raeisi will take an oath of office in an inauguration ceremony at the Iranian Parliament (Majlis) on Thursday.

Seyyed Nezamoddin Mousavi, the spokesman for the Parliament’s presidium, said Monday that a long list of foreign officials and political figures have accepted Iran’s invitation to attend the event despite the COVID-19 pandemic.

He said 115 officials from 73 countries have already declared their readiness to attend the inauguration ceremony.

The heads of 11 international and regional organizations and the representative of the UN chief, along with officials from the Inter-Parliamentary Union (IPU), the European Union (EU), the Economic Cooperation Organization (ECO), the Conference on Interaction and Confidence-Building Measures in Asia (CICA) and the D-8 Organization for Economic Cooperation also known as Developing-8 have been invited to the event.

Mousavi said 170 domestic and foreign journalists have also received invitations to provide coverage of the event.

The Organization of the Petroleum Exporting Countries (OPEC) Secretary General Mohammed Sanusi Barkindo, President of Iraq’s semi-autonomous Kurdistan Region Nechirvan Barzani and Serbia’s Parliament Speaker Ivica Dacic are said to be among the guests at the inauguration ceremony.