After the UK and US baselessly accused Tehran of involvement in an attack on a ship in the Sea of Oman, the Iranian foreign ministry spokesman tweeted Mon. to warn them against any adventurism.

Khatibzadeh went on to warn against any attack, stressing “Any anti-Iran adventurism will receive IMMEDIATE & DECISIVE response.” 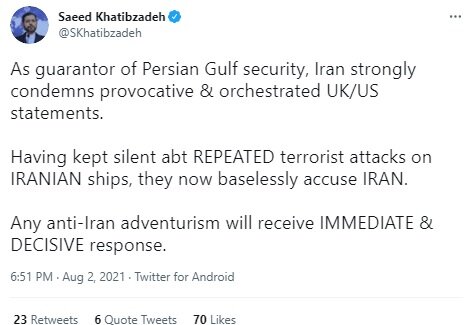 It is noteworthy that in a statement earlier on Monday, the Iranian foreign ministry spokesman strongly rejected the accusations leveled by the UK Foreign Secretary Dominic Raab against Tehran as paradoxical, provocative, baseless.