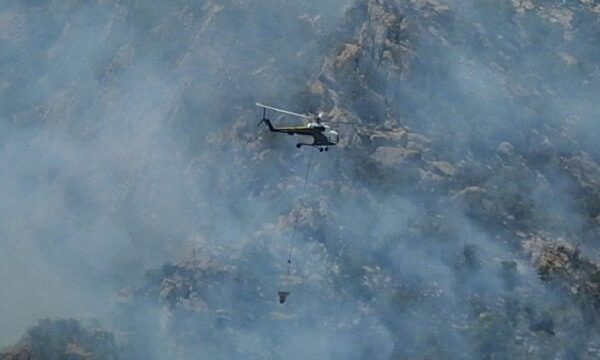 IRGC helping Turkey to put out fire by 1 plane, 2 helicopters

Following several wildfires in the forests of the southern provinces of Turkey, one Ilyushin 76 aircraft and two MI 171 helicopters of the IRGC Aerospace Force have been involved in firefighting operations in Turkey.

According to the Sepah News, following the request of Turkey to the Islamic Republic of Iran to help extinguish fires in forests and different provinces of the country and according to the General Staff of the Armed Forces, the IRGC Aerospace Force sent an Ilyushin 76 aircraft and two MI 171 helicopters to provide assistance to Turkey in firefighting operations.

According to Turkey, 20 points in seven Turkish provinces are on fire and southern Turkey is fighting the flames.  The death toll from wildfires on Turkey’s southern coast rose to eight on Sunday as firefighters battled for a fifth day to contain blazes still raging in coastal resort towns.

Since Wednesday thousands of people have been evacuated from their homes. Locals, as well as support teams from Russia, Ukraine, Iran, and Azerbaijan, were deployed to help firefighters. The Turkish government pledged to rebuild damaged homes and compensate for losses in areas affected by the fires.

Iranian Ambassador to Ankara Mohammad Farzmand in a tweet on Saturday night announced that the Ministry of Defense’s firefighting aircraft also participated in fire control operations in southern parts of this country.

Iranian Foreign Minister Mohammad Javad Zarif also expressed sympathy with Turkey over the widespread fire in parts of the forests of Turkey’s southern provinces, saying that Iran’s facilities will be at the disposal of its brothers and sisters in Turkey.