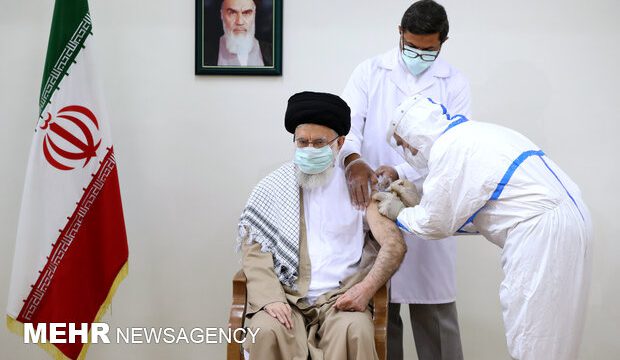 Leader of the Islamic Revolution Ayatollah Seyyed Ali Khamenei has blamed the disruption in people’s access to coronavirus vaccines on breach of promises by foreign vaccine sellers, reiterating his call for self-reliance in vaccine production.

In his remarks after receiving the second dose of the indigenously-produced COVIran Baraket vaccine in Tehran Friday, Ayatollah Khamenei urged officials to focus on domestic production of Covid-19 vaccines and to ensure smooth vaccine roll-out.

“This issue (of disruption in access to vaccines) once again reminded the people and officials that relying on others causes problems, so we must be able to stand on our own feet in all matters,” the Leader asserted.

The Leader touched on many mutations of the virus and their cataclysmic dangers, urging the people to comply with all necessary heath protocols, as recommended by health authorities.

He said the full compliance with health guidelines will eradicate the disease or contain it from spreading.

Ayatollah Seyyed Ali Khamenei, who received his first jab of the vaccine developed by Iran’s Shifa Pharmed Industrial Group on June 25, lauded the efforts of healthcare workers, especially the scientists and researchers involved in the production of local vaccines.

He called on the government agencies to “seriously support” the production of domestic vaccines so that the delay in administering vaccines to people of all age-groups can be reduced.

In other remarks, the Leader said the grievances of people in the southwestern province of Khuzestan are valid, adding the complaints should have been addressed before to prevent people from being upset over the situation.

The province has been rocked by protests in recent weeks over water shortage. The demonstrations, however, have been hijacked by enemy forces, resulting in some incidents of violence.

“The people expressed their frustration, but no one can complain about them, because the issue of water is not a small thing, especially in that hot climate of Khuzestan,” the Leader said, describing the problem as “one of the really painful worries”.

Ayatollah Khamenei stated that he had repeatedly notified relevant officials before about the need to address the water issue in Khuzestan and sewage system in the provincial capital of Ahvaz.

“If those recommendations had been taken into account, the current situation would certainly have not arisen where the loyal people of Khuzestan, in spite of all their natural potentials and factories in the province, are disenchanted and upset.”

Ayatollah Khamenei hailed the people of the border province as “loyal and selfless” and said they remained on the “forefront” during the eight years of war imposed on Iran by Iraq’s former dictator Saddam Hussein.

He said the governmental and non-governmental organizations have started work to address the issues in Khuzestan while urging the authorities to seriously follow the demands of the people.

Ayatollah Khamenei also cautioned people against playing into the hands of trouble-makers.

“The enemy seeks to use everything against the revolution, the country and the interests of the people; therefore, care must be taken not to give it an excuse.”