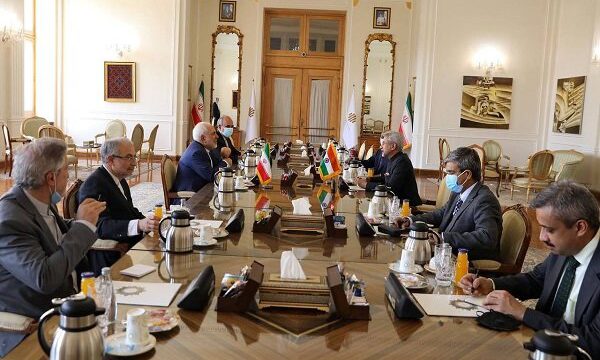 Iranian Foreign Minister Mohammad Javad Zarif and his Indian counterpart Subrahmanyam Jaishankar, in a meeting in Tehran on Wednesday, underlined the need to give a boost to Intra-Afghan talks to pave the way for participation of all the Afghan sides in the political process of the country.

The meeting took place as the Indian foreign minister is in Tehran to submit a written congratulatory message of his country’s Prime Minister Narendra Modi to Iranian President-elect Ebrahim Raisi.

The two foreign ministers also discussed the latest regional developments, the situations in Afghanistan, nuclear talks between Iran and the 4+1 in Vienna, transportation cooperation, including cooperation in the Port of Chabahar which can help Promote convergence in the region.

The Indian foreign minister referred to the ongoing talks between Afghanistan’s government and the Taliban groups in Tehran, hailing Iran’s efforts to bring close the viewpoints of both sides to reach a comprehensive political solution.

Director General of Iranian Foreign Ministry;s West Asia Department Seyyed Rasoul Mousavi tweeted on Wednesday that “Indian FM @DrSJaishankar just arrived in Tehran. He will have very important meetings in his short visit. I am sure this visit will be the basic basis for Iran-India relations during the presidency of Seyed Ebrahim Rayeesi.”

The Indian foreign minister will then leave Tehran for Moscow to attend a meeting of the Trade, Economic, Scientific, Technological and Cultural Cooperation Commission of the Russian and Indian Governments.

In September 2020, the Indian Foreign Minister arrived in Iran for a short visit and met with senior Iranian officials before his visit to Russia.

Jaishankar’s visit to Iran comes as an intra-Afghan talks meeting attended by representatives of the Afghan government and Taliban’s high political delegation hosted by Iran started on Wednesday.