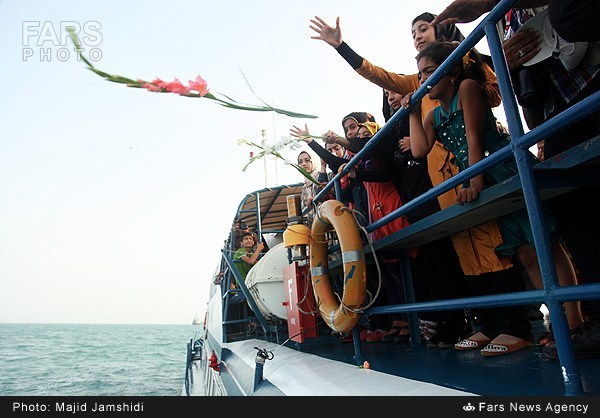 Iran on Sat. commemorated the 33rd anniversary of the downing of the 290 passengers of Iran Air flight 655 by a US Navy guided-missile cruiser over the Persian Gulf.

A memorial ceremony was held today on the tragedy’s anniversary, with the participants, including the families of the victims and local officials, tossing flowers into the waters of Hormozgan Province near Hengam Island.

They also chanted slogans such as “Down with the US” and “Down with Israel”.

On July 3, 1988, the USS Vincennes fired missiles at an Iran Air Airbus A300B2 which was flying over the Strait of Hormuz from the port city of Bandar Abbas to Dubai, carrying 274 passengers and 16 crew members.

Following the attack, the plane disintegrated and crashed into the Persian Gulf waters, killing all 290 onboard, among them 66 children.

In 1990, the captain of the cruiser, William C. Rogers, was cleared of any wrongdoing and was even awarded America’s Legion of Merit medal by then US president George Bush for his “outstanding service” during operations in the Persian Gulf.