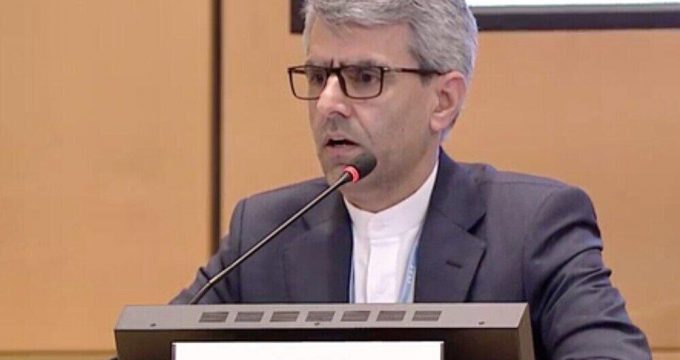 Permanent Representative of the Islamic Republic of Iran to the United Nations and other international organizations in Geneva Esmaeil Baghaei Hamaneh said the anti-Iran report of the United Nations Human Rights Council (UNHRC) is entirely based on political mandate.

“The report presented today is based on an entirely political mandate initiated by a group of like-minded, or rather ‘similarly-biased’, countries that have for long instrumentalized human rights as part and parcel of their adversarial agenda against Iran,” Esmail Baghaei Hamaneh said addressing the 47 Session of the Human Rights Council on the Situation of Human Rights in the Islamic Republic of Iran.

He said that the Islamic Republic of Iran is fully committed to the protection and promotion of human rights, and respects its international obligations. Just yesterday, we submitted Iran`s fourth national report on the implementation of the International Covenant on Civil and Political Rights to the Human Rights Committee. We cannot afford to be dissuaded from consolidating our efforts on promotion and protection of human rights because of unfair pressures and baseless allegations.

We urge all States to uphold the principles of universality, objectivity and non-selectivity in the consideration of human rights issues and the elimination of double standards and politicization.

The Iranian official further noted that “the Iranian people have shown ‘maximum resilient’ against the cruel unilateral coercive measures strategized by Trump regime to put so-called ‘maximum pressure’ on Iran as part of their obsessive addiction to unilateralism and their hostility toward Iran.

The US continues to carry on with the unlawful and inhuman legacy of the former administration in complete defiance of international law and basic principles of humanity. We should never forget that the US even tightened its unilateral sanctions during the pandemic leaving no doubt as to their true intention to immiserate a whole nation, in bold disrespect to the ICJ’s ruling of 3 October 2018 which ordered the US to remove any impediment to export foodstuffs, medicine and medical devices to Iran.

The US and its enablers and those States that have been enforcing its unilateral coercive measures must be held to account for the massive systematic and gross violations of human rights. The United States is allegedly one of the major advocates of this reporting scheme and I leave it to my audience to make their judgment if an imposer of such atrocious unilateral coercive measures can logically claim to care for the human rights of the Iranians?!”

He went on to say that “the report presented today is based on an entirely political mandate initiated by a group of like-minded, or rather ‘similarly-biased’, countries that have for long instrumentalized human rights as part and parcel of their adversarial agenda against Iran. The product of such prejudicial mandate is unavoidably biased toward reinforcing the prejudices.

The report is one of the four yearly reports – all similar in content, theme and tone- originating from a mentality that is far from good faith- compiled inevitably to satisfy the mandate devised by a few Western States to pressurize and demonize Iran.

Is it really the most efficient and effective way of using the UN scarce budgets and resources to turn human rights agenda into a platform for confrontation and absolutely one-sided attack on a member State?!

The successive reporting instructed under relevant UNGA resolutions tabled each year by Canada-a country that decided to sever diplomatic relations with Iran more than a decade ago for no good reason and that persists in its policy of denying the huge Iranian diaspora of their basic consular rights- are purposely aimed at antagonizing Iran and generating negative stereotyping.

The question is if and how such flawed mandate that comes from an overblown sense of self-entitlement and lacks any good faith on the part of its main sponsors could possibly contribute to the promotion and protection of human rights other than compiling volumes of documents full of controversial and inaccurate information and false narratives.

The patterned methodology used in compiling the reports is impeccably based on over-generalizing individual cases, magnifying negatives, minimizing positives and catastrophizing the whole situation.

I give you just one example. In paragraph 61 of the report it is claimed that the number of homeless people in Tehran is around 700000. This is absolutely false. The compilers of the report didn’t bother to check the original Persian news before rushing to include this ‘favorite’ data in the report.”

Hamaneh also said that “despite all the misgivings, Iran, as always, didn’t hesitate to try in all good faith to correct a host of disinformation, false claims and unsubstantiated allegations mentioned in the report. We wish that Iran’s responsible and professional approach would have been reciprocated by the report compilers who, instead, opted to ignore the overwhelming majority of our 60-page comment and clarification.

We regret that the compilers continue to underestimate drastically the negative impacts of UCMs on human rights.

We also regret that the UN Human Rights mechanisms preferred to keep silent on the assassination of Iranian nationals and scientists.”

“Last Friday, the Iranians elected their city & town councils across Iran as well as the13th president of the Islamic Republic through the ballot box and showcased their determination to exercise their constitutional rights and secure the country’s democratic processes.

The Islamic Republic of Iran remains resolute in upholding human rights. We continue our interactive approach to contributing to the promotion and protection of all human rights for all, including through constructive engagement with other States, the office of the UN High Commissioner and relevant mandate holders,” he concluded.