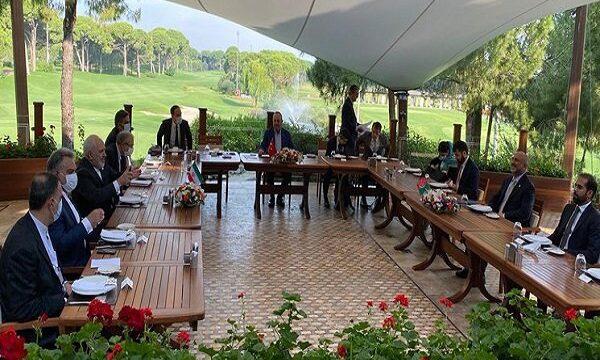 In a trilateral meeting, the foreign ministers of Iran, Turkey and Afghanistan emphasized the active participation of the three countries in the Afghan peace process and the fight against terrorism in the region.

The tripartite meeting of Mohammad Javad Zarif, Mevlut Cavusoglu, and Mohammad Hanif Atmar, the foreign ministers of the Islamic Republic of Iran, Turkey and Afghanistan was held in Antalya, Turkey a few hours ago.

During the meeting, the foreign ministers emphasized the active participation of the three countries in the Afghan peace process and the fight against terrorism in the region.

Transit cooperation with Afghanistan through Iran’s communication routes, as well as the development of economic cooperation with this country were among agreements reached in this meeting.

At the end of the meeting, a trilateral statement was issued by Mohammad Javad Zarif, Mevlut Cavusoglu, and Mohammad Hanif Atmar.

Iranian Ambassador to Turkey Mohammad Farazmand also in a tweet announced the holding of the meeting, saying that trade, transit, migration, drug trafficking and counterterrorism were among the topics discussed at the meeting.

Zarif arrived in Antalya on Thursday, June 17, to attend the Antalya Diplomatic Forum.

He has met with some officials present in Antalya, including the foreign ministers of Iraq, Venezuela, Afghanistan, Croatia, Pakistan, Tajikistan, Poland as well as EU Foreign Policy Chief Josep Borrell and the Head of Afghanistan’s High Council for National Reconciliation Abdullah Abdullah.