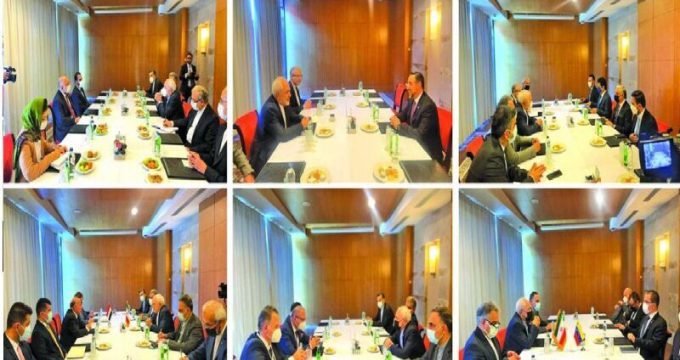 The Antalya Diplomacy Forum is an appropriate opportunity for high-ranking officials from around the world to hold discussions, which has been taken seriously by Iran’s Foreign Minister Mohammad Javad Zarif to expand ties between Tehran and other capitals.

Zarif left Tehran for Turkey on Thursday to take part in the three-day forum, which kicked off on June 18 and comes to an end on June 20.

The top Iranian diplomat has held talks with a number of high-ranking officials and counterparts on the sidelines of the forum, including foreign ministers from Iraq, Venezuela, Afghanistan, Croatia, Poland, Pakistan, Turkey, Kuwait, and Tajikistan, as well as EU High Representative for Foreign Affairs and Security Policy and Vice-President of the European Commission Josep Borrell.

Zarif and Turkish Foreign Minister Mevlüt Çavuşoğlu discussed ways to expand economic cooperation and they reached an agreement to hold tripartite sessions among Ankara, Baku and Tehran to discuss railroad and waterway projects.

In a meeting with his Venezuelan counterpart Jorge Arreaza, Zarif recalled the United States’ illegal obstructionism in the way of implementing the 2015 Iran nuclear deal. Zarif and Arreaza also held talks on bilateral, regional and international relations.

Arreaza condemned the US policy of sanctioning other nations especially when it comes to procuring coronavirus vaccines and expressed gratitude for the Islamic Republic’s assistance to the Venezuelan nation.

Tajikistan’s Foreign Minister Sirojiddin Muhriddin and his Iranian counterpart held talks on the sidelines of the forum, underlining that Dushanbe-Tehran cooperation to fight insecurity in the region is very importance.

Meanwhile, Zarif and his Pakistani counterpart Shah Mahmood Qureshi called for the expansion of relations between the two neighboring states. They also discussed the latest situation of the Iran nuclear talks in Vienna as well as regional developments, particularly the security situation in Afghanistan.

Following the meeting, Zarif on his twitter page expressed satisfaction with the meeting and said the two sides are optimistic about further expanding bilateral relations including on border markers.

In his bilateral meeting with Iraqi Foreign Minister Fuad Mohammed Hussein, Zarif welcomed talks on the region’s security and announced Iran’s readiness to further expand economic ties between the two countries. The Iraqi minister thanked Iran for its efforts to develop bilateral relations.

The Iranian foreign minister also discussed Iran’s ties with Afghanistan and Croatia with his Afghan and Croat counterparts on the sidelines of the forum.

Zarif also met with EU foreign policy chief Josep Borrell. The two sides discussed various issues including the ongoing talks over the revival of the Iran nuclear deal. Zarif stressed that US sanctions against Iran should be removed in order for the talks to continue.