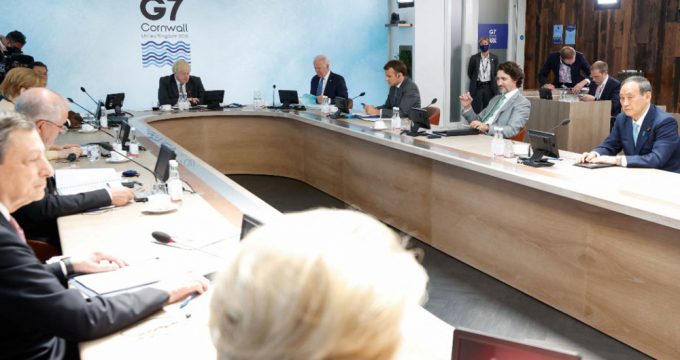 The participants in the summit of the Group of Seven industrial nations, known as the G7, have emphasized that the restoration and full implementation of a landmark nuclear deal between Iran and world powers would help all parties to address regional and security concerns.

“A restored and fully-implemented JCPOA could … pave the way to further address regional and security concerns,” they said in their final communique on Sunday, referring to the official name of the deal, the Joint Comprehensive Plan of Action (JCPOA).

Claiming that they are committed to “ensuring that Iran will never develop a nuclear weapon,” the G7 leaders welcomed “the substantive discussions between JCPOA participants” in the Austrian capital, Vienna, in which the US is also indirectly involved, which aim to “accomplish a return of the United States and Iran to their JCPOA commitments.”

The G7 leaders also indicated their support for “the goal of restoring the nonproliferation benefits of the JCPOA and of ensuring the exclusively peaceful nature of Iran’s nuclear program.”

They urged Iran “to stop and reverse all measures that reduce transparency and to ensure full and timely cooperation with the International Atomic Energy Agency.”

In 2015, Iran and six world states — namely the US, Germany, France, Britain, Russia and China — signed the historic nuclear deal, which was ratified in the form of UN Security Council Resolution 2231.

However, under former President Donald Trump, the US withdrew from the JCPOA and initiated a “maximum pressure” policy against Iran.

Besides re-imposing the anti-Iran sanctions lifted by the JCPOA, the US targeted the Iranian nation with several sets of additional bans under new pretexts and labels.

After the withdrawal, Iran waited for a year for the Europeans to take remedial measures and thwart the unilateral American sanctions as per their obligations under the JCPOA, but to no avail.

Now, with Trump gone, the new US administration under President Joe Biden says it seeks to rejoin the deal, but it has so far refused to take meaningful action to regain Iran’s trust and come back to compliance.

Since April, representatives from Iran and the remaining parties to the JCPOA have been holding talks in Vienna aimed at reviving the 2015 nuclear deal and bringing the US back to compliance with the accord.