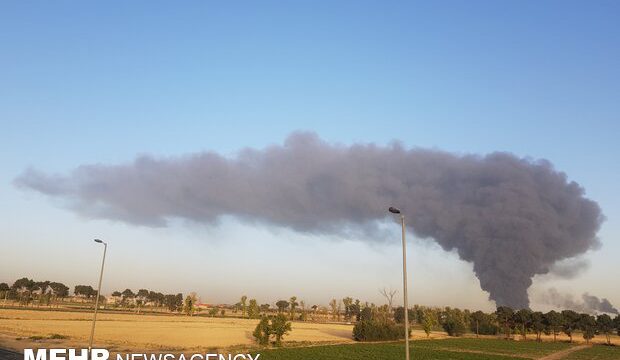 A dense smoke is rising from southern Tehran that can be seen even from the northern sections.

According to the head of Tehran crisis management Mansour Darajati, one of the gas pipelines in one of Tehran’s petrochemical plants has caught fire.

The official says firefighters from different areas of the city, and also other forces have been dispatched to the area to distinguish the fire.

Speaking to IRINN, Darajati says the incident does not seem to be too serious.

No casualties have been reported so far.

In a statement, Tehran’s petchem plant public relation rejected the possibility of sabotage in the incident.

The incident has happened due to an error in a process and forces are trying to contain the fire, adds the statement.

According to Jalal Maleki, spokesman of Tehran’s firefighters, one of the gas tankers in the plant has also caught fire.

Meanwhile, a reporter from YJC said that 18 tankers in the plant are on fire.

Tehran's petrochemical plant June 2, 2021
All parties in Vienna talks believe disputes not unresolvable
Iran’s top JCPOA negotiator says next round of talks could be final