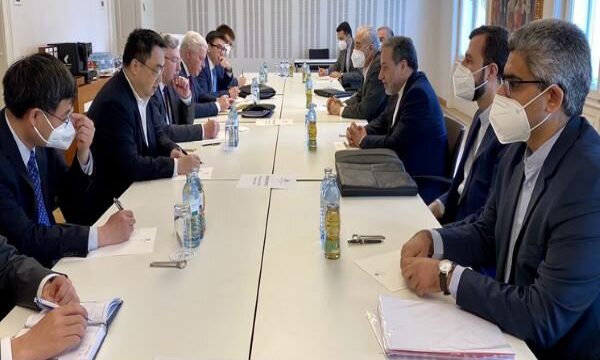 Iran’s negotiating delegation met and held talks on Wednesday with the Russian side ahead of the Joint Comprehensive Plan of Action (JCPOA) Joint Commission.

The fifth round of talks between the remaining participants to JCPOA began in the Austrian capital last Tuesday. The participating parties say that the talks have made good progress and a final agreement is within reach.

The Iranian delegation to Vienna headed by Araghchi is moving forward with talks with participants to the nuclear deal, ahead of another Joint Commission meeting.

The latest round of Joint Commission meetings started on April 2 with a virtual conference and is pursued by other meetings in person in Vienna.

Britain, China, France, Germany, Iran, and Russia have been attending the meetings as the JCPOA participants and a delegation from the United States in Vienna holding talks with the Europeans.

Iran has stated that it wasn’t going to have any direct or indirect talks with the US representatives as it deems such talks unnecessary.

The US has indicated that it’s willing to rejoin the JCPOA, after the 2018 withdrawal by the Trump administration, but has yet to take the first step which Iran insists must be from the American side.