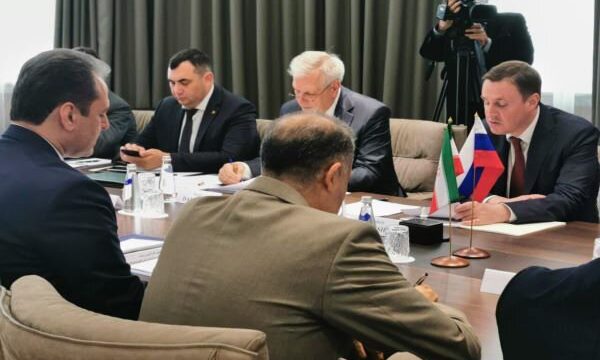 Minister of Agriculture of the Russian Federation, Dmitry Patrushev, and Iranian agriculture minister Kazem Khavazi emphasized the development of cooperation between the two countries in the field of agriculture.

In this meeting, which was participated by Iran’s Ambassador to Moscow Kazem Jalali, the two ministers announced their country’s readiness to invest in various fields of agriculture.

Iran calls on Russia’s assistance in accelerating the start of open negotiations between Iran and Eurasia, and the Iranian private sector’s joint investment with Russian businessmen said Khavazi in this meeting.

He went on to say, “According to the views of the leaders of the two countries on the boosting of cooperation between the two sides in various fields, new developments should begin in the agricultural sector.”

Referring to the common needs of the two countries in the field of agricultural products, cereals, protein materials, vegetables, fruits and nuts, the Russian minister also said, “In order to accelerate the process of cooperation, it is necessary to introduce Iranian companies to the Russian Ministry of Agriculture so as to start joint activities in the agricultural sub-sectors.”

Expressing satisfaction with the significant increase in cooperation between Iran and Russia in various fields, the Russian Minister of Agriculture said, “We hope that the agricultural sector and its various subdivisions will grow significantly.”

Iran-Russia trade May 28, 2021
Iran advises US, UK FMs to focus on reviving JCPOA
As long as Israel is let off the hook, violence will never end in region: Iranian diplomat