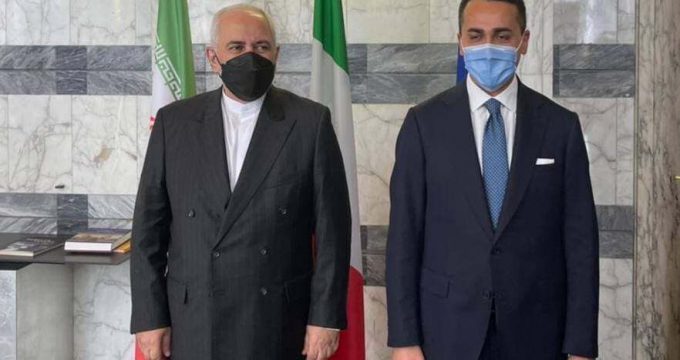 Iranian Foreign Minister Mohammad Javad Zarif on Monday in his meeting with his Italian counterpart Luigi Di Maio, conferred on mutual cooperation between the two countries, and issues of mutual interest.

Zarif met and held talks with the Minister of Foreign Affairs and the International Cooperation of Italy Luigi Di Maio to discuss the expansion of bilateral relations between the two countries of Iran and Italy.

Referring to the recent virtual OIC extraordinary meeting, Zarif condemned the actions and aggression of the Zionist regime against the Gaza Strip as a result of which tens of Palestinian civilians, including children and women, were killed and several residential buildings were destroyed as a clear example of the violation of human rights and international law.

The Minister of Foreign Affairs and International Cooperation of Italy Luigi Di Maio, for his part, underlined his country’s desire to expand mutual cooperation with Iran, especially in political, economic, and cultural fields.

Elsewhere in his remarks, supporting JCPOA, Luigi Di Maio called for exchanging views and consultations with the Islamic Republic of Iran regarding regional and international issues.

In Rome, Zarif is to hold talks with officials of Italy and Vatican City on developing joint bilateral and international cooperation.

Prior to Rome, Zarif visited Madrid and reviewed regional and international cooperation.