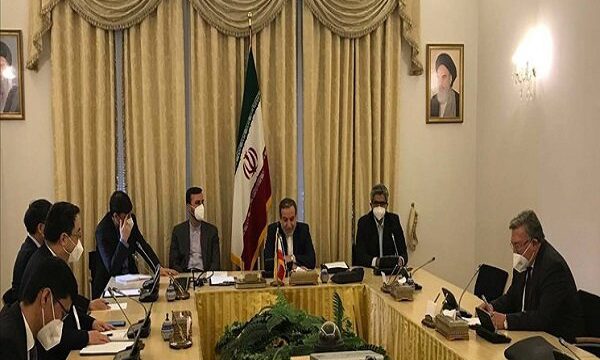 The heads of the Russian and Chinese delegations, in a meeting with the Iranian Deputy Foreign Minister Araghchi in Vienna, reiterated their support for the effective lifting of sanctions against the Iranian people.

Following intensive consultations in Vienna, a trilateral meeting with the heads of delegations of Iran, Russia and China was held on Wednesday evening at the Representation of the Islamic Republic of Iran in the Austrian capital.

The participants discussed some important issues related to the lifting of sanctions and nuclear issues.

At the meeting, the representatives of Russia and China, while recalling Iran’s active role in the progress of the talks, reiterated their support for the effective lifting of sanctions against the Iranian people.

The three countries also called for accelerated progress in the talks.

Consultations and meetings between the delegations of Iran and the P4+1 countries continue in the form of trilateral working groups and bilateral and multilateral meetings at various levels.

Tehran is engaged in Vienna talks with the remaining participants in the Iran nuclear deal (JCPOA) namely China, Russia, and the three major European countries of Britain, Germany and France in a bid to revive the nuclear deal. The United States is not present as Iran has refused to directly talk with the new US administration that still continues illegal Trump-era sanctions against the Iranian nation.

Despite early promises during his presidential campaign, US President Joe Biden has not returned his country to the deal so far. By doing so, the Biden administration is following in the Trump administration’s footsteps and continues to stick to the illegal sanctions on Iran in violation of the nuclear deal. Washington has set illegitimate preconditions for returning to the JCPOA which are strongly rejected by Iran.

After the US exit from the world powers’ nuclear deal with Iran in May 2018 and imposing the unprecedented sanctions on the Iranian nation which was followed by the indifference of the European parties to the need for compensating Iran’s losses as a result of the US violations of the international accord, Iran started reducing its JCPOA commitments in five steps and finally suspended voluntary implementation of the Additional Protocol on February 22. Tehran recently started 60% enrichment after an “act of sabotage” done reportedly carried out by the Israeli regime on one of its nuclear sites in Natanz. The JCPOA Paragraph 36 allows Iran to diminish its abidance in the case of violations of the deal by other parties.

Iran has vowed that it will change course and will return immediately to its JCPOA commitments as soon as other parties, most notably the Europeans, abide by the provisions of the accord.