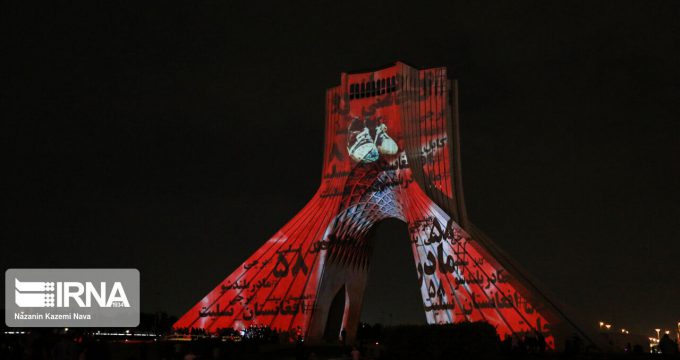 n solidarity with Afghanistan and the victims of the recent brutal terrorist attack targeting a girls’ school in Kabul, the iconic Azadi Tower in the Iranian capital, Tehran, has been lit up with the colors of the Afghan flag.

The screening of the Afghan flag and images with the hashtag “#Where_are_you_the_dear_one_of_the_father” were part of the video mapping that was performed on Tehran’s Azadi Tower on Tuesday night.

Iranian Foreign Minister Mohammad Javad Zarif said in a post on his Twitter account on Wednesday that a lighting ceremony had been performed at Azadi Tower to honor the victims of the deadly school attack in Kabul, who were mostly female students, and to express sympathy with their families and the Afghan nation.

“Last night, Tehran’s Azadi Tower mourned the victims of Sayed-ul-Shuhada School in Kabul along with Afghanistan’s people,” Zarif wrote in his tweet.

On Saturday afternoon, an explosion occurred near Kabul’s Sayed-ul-Shuhada Girls High School in the Shia majority neighborhood of Dasht-e-Barchi in western Kabul.

As many as 63 people, mostly school girls, were killed and 150 more were wounded in the blast.

The Taliban, however, did not claim responsibility.

Meanwhile, members of the United Nations Security Council (UNSC) have strongly condemned the “atrocious and cowardly terrorist attack” in Kabul, stressing the need to hold “perpetrators, organizers, financiers and sponsors of these reprehensible acts of terrorism accountable and bring them to justice.”

“The members of the Security Council expressed their deepest sympathy and condolences to the families of the victims and to the Government of Afghanistan and they wished a speedy and full recovery to those who were injured,” the Council said in a statement on Monday night.

The UNSC also expressed deep concern over the significant number of attacks on schools and education facilities in Afghanistan in recent months, stressing the importance of sustained efforts to end the ongoing violence and protect civilians in the war-ravaged country.