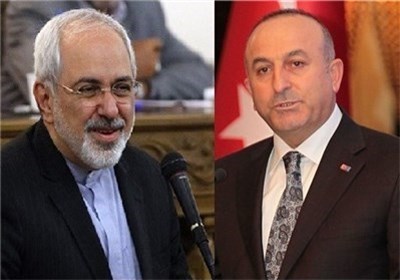 Top diplomats from Iran and Turkey talked about the latest flare-up of tension in Palestine following the Israeli regime’s aggression against the residents of Jerusalem al-Quds.

In a telephone conversation on Monday, Iranian Foreign Minister Mohammad Javad Zarif and his Turkish counterpart Mevlut Cavusoglu discussed the latest developments in Jerusalem al-Quds and the occupied Palestinian territories.

The two senior diplomats agreed that, should the UN Security Council fail to make an effective decision against the Zionist regime’s acts of aggression, Iran and Turkey would pursue the issue within the framework of the UN General Assembly or by holding an extraordinary meeting of the Executive Committee of the Organization of Islamic Cooperation (OIC).

Zarif and Cavusoglu also stressed the need for close consultations between Tehran and Ankara in this regard, according to the Iranian Foreign Ministry’s website.

Tensions have escalated in Jerusalem, the occupied West Bank and Gaza throughout the Muslim holy month of Ramadan, amid growing anger about potential forced expulsions of Palestinian families in Sheikh Jarrah, on land claimed by illegal Jewish settlers, as Israeli police continues to crack down on protesters.