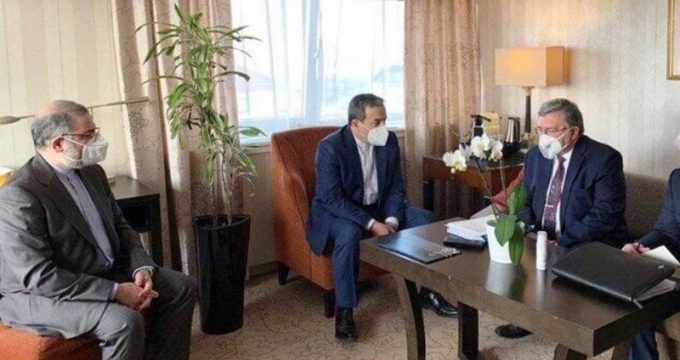 Top negotiators from Iran and Russia held extensive talks in Vienna hours before a new meeting of the JCPOA Joint Commission which will assess the outcome of the negotiations that three specialized working groups have held over the past days.

Iranian and Russian teams of negotiators, led by Abbas Araqchi and Mikhail Ulyanov, held a meeting in the Austrian capital on Saturday morning to coordinate their policies in advance of the JCPOA Joint Commission meeting.

The Iranian and Russian negotiators stressed the need for coordination between the stances of Tehran and Moscow on the JCPOA talks.

In the gathering, Ulyanov reaffirmed Russia’s support for the 2015 nuclear deal and emphasized the need for the termination of the US sanctions against Iran.

Today’s session of the JCPOA Joint Commission will be attended by the heads of delegations from the remaining parties to the 2015 nuclear deal, namely Iran, Russia, China, the UK, France and Germany.

It will review the progress in the activities of three working groups that focus on nuclear issues, the removal of sanctions, and the JCPOA implementation arrangements.

The three working groups and diplomatic teams have held intensive negotiations in Vienna over the past days to agree on a final text about the revival of the nuclear deal or a possible return of the US to the JCPOA.

The negotiating teams from the Group 4+1 will return to their respective capitals after the Saturday meeting.

A new round of talks began in Vienna on April 6 between Iran and the remaining members of the nuclear deal.