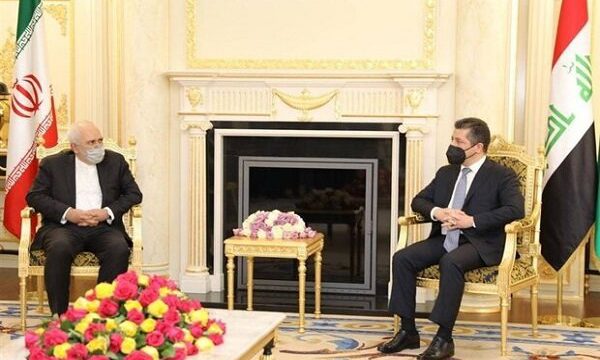 Iranian Foreign Minister Mohammad Javad Zarif and Iraqi Kurdistan Regional Government Prime Minister Masrour Barzani on Tuesday emphasized the need for the spread of stability and calm in Iraq as well as not-allowing anti-Iranian measures in the Iraqi Kurdistan region.

In this meeting, visiting Iranian Foreign Minister Zarif reviewed Iran’s relations with Iraq’s KRG in various fields of trade, economy, technical and engineering services, and activities of border crossings and consular issues, and raised some of the existing problems in this regard with the Prime Minister and called for reviewing and removing the existing problems facing ahead.

During the meeting, the two sides stressed the stability and calm in Iraq and not allowing anti-Iranian actions in Iraqi Kurdistan.

Iran-Iraqi Kurdistan ties April 28, 2021
JCPOA Joint Commission decides to speed up talks
Erbil not to allow its soil to be used against Iran