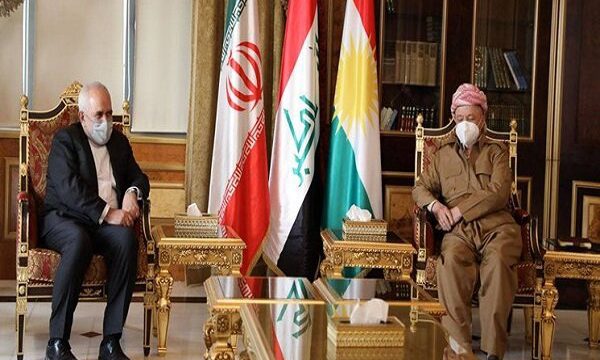 Erbil not to allow its soil to be used against Iran

In a meeting with Iranian foreign minister Zarif, Masoud Barzani stressed that Erbil won’t allow any groups to use its soil to pose threat against Iran.

Iranian Foreign Minister Mohammad Javad Zarif, arrived in Erbil on Tuesday afternoon on the second day of his visit to Iraq, after his visit to Baghdad and his meetings with Iraqi officials and political figures.

He met with Massoud Barzani, the leader of Iraqi Kurdistan Democratic Party after arriving in Erbil, the capital of the Kurdistan Regional Government (KRG).

Massoud Barzani said that the Iraqi Kurdistan government will not allow any groups to use its soil to pose threat against Iran.

Barzani, for his part, expressed his hope for a positive outcome of Vienna talks on reviving Iran’s nuclear deal and thanked the Islamic Republic of Iran for its perspective on the security of Iraq and the Kurdish region.

Zarif arrived in Erbil from Baghdad. During his visit to Baghdad, the Foreign Minister met with the Iraqi Foreign Minister, President and Speaker of Parliament as well as with the former prime ministers Maleki and al-Mahdi in addition to meetings with some other Iraqi political and religious leaders.

Zarif arrived in Iraq from Qatar yesterday. He is scheduled to continue his regional tour by traveling to Muscat to meet with his Omani counterpart.

Iran-Kurdistan ties April 28, 2021
Zarif-Barzani stress not allowing anti-Iranian actions in KRG
US must remove all post-JCPOA sanctions before returning to deal