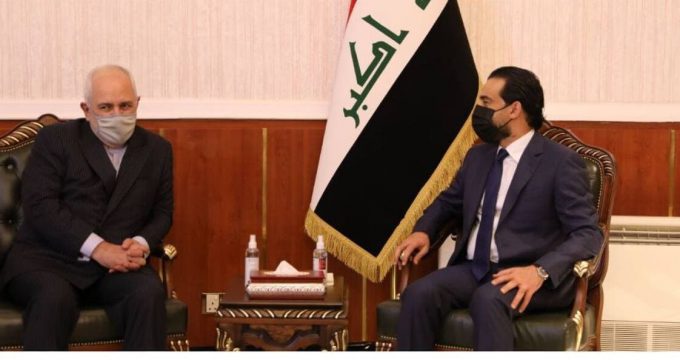 Iranian Foreign Minister Mohammad Javad Zarif and the speaker of Iraq’s Council of Representatives Mohamed al-Halbousi on Monday met and talked on the issues of mutual interest.

The US martyred anti-terror commander General Qasem Soleimani and Abu Mahdi al-Muhandis in the soil of Iraq, he said.

Zarif touched upon the upcoming elections in Iran and Iraq as a symbol of people’s sovereignty in both countries, wishing Iraq success in holding a peaceful election.

Iraq’s Council of Representatives Mohamed al-Halbousi, for his part, stressed the role of the Iraqi government and parliament in helping to shape stability in the region and supported the provision of conditions for enhancing trade between the two states.

Heading a delegation, Zarif arrived in Baghdad on Monday to confer with his Iraqi counterpart and other officials on his two-day stay.

Iran-Iraq ties April 26, 2021
Zaghari-Ratcliffe sentenced to another year in jail in Iran
Iran looks forward to bigger role for Iraq in Mideast: Zarif in Baghdad