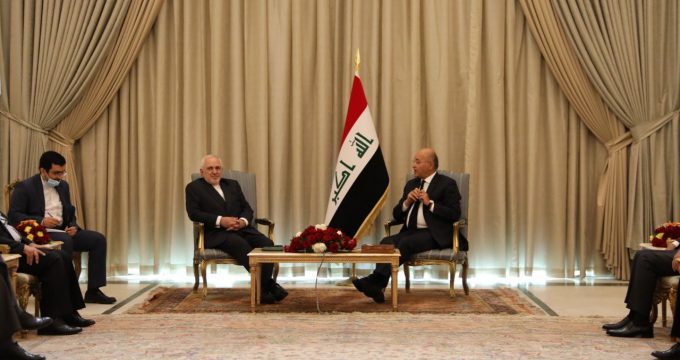 Iranian Foreign Minister Mohammad Javad Zarif stressed the need for the establishment of a regional security system with the participation of all Persian Gulf countries.

In a meeting with President of Iraq Barham Salih, held in Baghdad on Monday, Zarif highlighted the Arab country’s influential role and presence in regional affairs.

He also reiterated Iran’s emphasis on the formation of a security system in the region including all Persian Gulf countries, saying such a plan has already been proposed in the form of the Hormuz peace initiative put forward by Iranian President Hassan Rouhani.

Zarif also stressed the need for Iran and Iraq to carry out their previous agreements by skipping bureaucratic complications.

The Iraqi president, for his part, highlighted the significance of relations between Baghdad and Tehran and expressed his views on ways for an immediate implementation of the bilateral agreements.

The top Iranian diplomat and the Iraqi president also discussed other issues such as the fight against terrorism and extremism, financial interaction between the two neighbors, and their regional cooperation and collaboration with other regional countries.

Zarif has traveled to Iraq after paying a visit to Qatar.