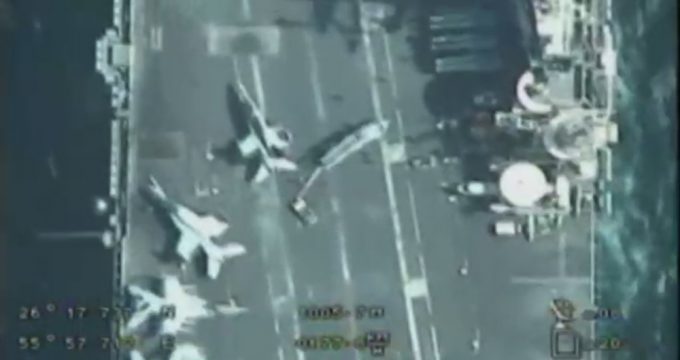 The Islamic Revolution Guards Corps (IRGC) has released strikingly precise and close footage of an American aircraft carrier captured by the elite force’s drones during an overflight of the vessel in the Persian Gulf.

The Corps released the footage on Wednesday as means of vividly portraying its state-of-the-art advancements in the field of drone technology.

The video recorded by an apparently four-strong drone squadron, provides real-time and remarkably close details of every warplane as well as other military aircraft and equipment deployed on the carrier.

The drones also captured what appears to be a support vessel sailing alongside the main vessel.

The IRGC footage shows UAVs of various makes, including the ones used for recording the video of the carrier, either taking off or roaring by across the sky.

The second part of the footage is entitled to precision attacks by the Corps’ kamikaze drones as they are hitting various targets, including a tank.