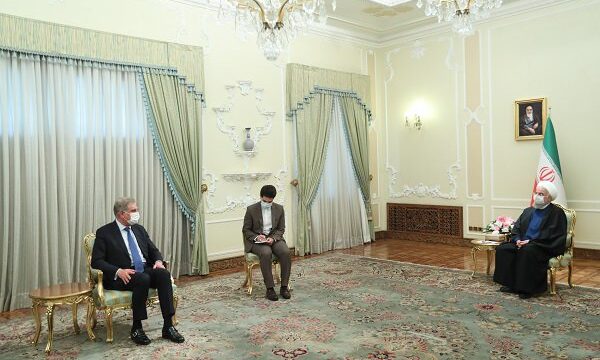 In his meeting with the Pakistan foreign minister, Iranian President Hassan Rouhani said that security is a common concern of the two countries, and strengthening cooperation in this area is necessary.

During the meeting with Pakistani Foreign Minister Shah Mehmood Qureshi on Wednesday, Rouhani pointed to the importance of cooperation with Pakistan as Iran’s Muslim neighbor and stressed the need to develop and deepen relations between the two countries in various fields, including economic and trade relations, as well as the development and strengthening of cross-border markets.

Referring to the US decision to withdraw from Afghanistan, he said that the US military presence in the region had not helped maintain security and stability.

“Iran and Pakistan, as the most important and effective neighbors of Afghanistan, must play their role in managing the peace process in this country through interaction and cooperation,” the President noted, adding, “The Islamic Republic of Iran welcomes cooperation with Pakistan and Afghanistan to play its role in this regard.”

Referring to the previous agreements between the two countries in order to develop cooperation, Rouhani stressed the need to implement the agreements.

He also announced the readiness of the Islamic Republic of Iran to meet Pakistan’s energy needs.

Qureshi, for his part, described the relations with the Islamic Republic of Iran as unique, valuable and fraternal and emphasized strengthening and consolidating these relations in all fields.

Referring to the emphasis of Pakistani Prime Minister Imran Khan on the further development of relations with Iran, he expressed hope that in the near future, bilateral relations will enter a new phase, especially in the trade and economic fields.

Appreciating Iran’s stance in support of Pakistan on regional and international issues, Qureshi declared his country’s support for the JCPOA as a major achievement of world diplomacy.

“We are very pleased that the JCPOA has been preserved through Iran’s efforts and that we are witnessing renegotiations today to revive this multilateral agreement,” the Pakistani foreign minister said.