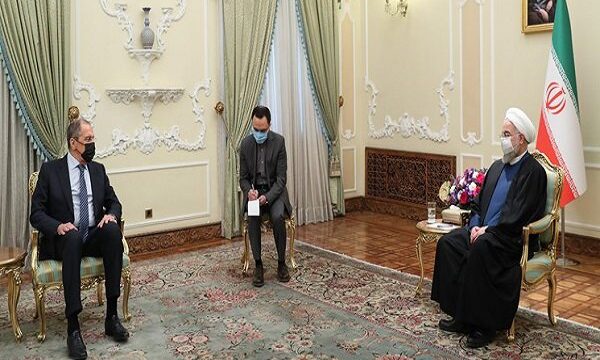 President Hassan Rouhani said on Tuesday in the meeting with Russian Foreign Minister Sergei Lavrov that letting the Zionist regime as a destabilizing tension-creating element into the Persian Gulf region is a dangerous move.

Stressing the necessity to counter US unilateralism through expansion of regional cooperation, President Rouhani welcomed the cooperation with the goal of helping the establishment of peace and stability in the region as a strategic move against US unilateralism and interference in regional countries affairs.

Saying that the security, peace, and stability of the region should be provided by the regional countries, the Iranian president stressed Iran-Russia defense and military cooperation, with regard to the termination of Iran’s arms embargo in October 2020.

President Rouhani also appreciated Moscow’s stances and supports in the nuclear talks and emphasized the continuation of efforts for reviving the Joint Comprehensive Plan of Action (JCPOA) as a multilateral agreement that is an example of solving issues through negotiations and diplomacy.

He said that the moves of the two countries show common ideas about international issues, including the JCPOA, adding that today, the cooperation is definitely effective for the revival of the deal.

President Rouhani went on to say that Iran wants the relations and the commitments to go back to how they were in 2015 and all the parties of the deal fulfill their promises, adding that Iran accepts neither less nor more than that.

Regarding the regional issues, including Syria and Yemen, he stressed cooperation between Iran and Russia as two influential countries in the region for solving the crises.

Referring to good relation between Tehran and Moscow in political and regional fields, Rouhani stressed strengthening economic relations and acceleration and implementation of joint projects in oil, energy, and transportation, as well as cooperation for building two nuclear power plants in Bushehr.

He also referred to Russia’s success in making the COVID-19 vaccine and called for faster shipment of the vaccine to Iran and the launching of a production line in Iran.

Russian foreign minister said in the meeting that there is no limitation for the expansion of relations between Tehran and Moscow, including defense and technology.

Lavrov said that Iran and Russia have common and close goals about international and regional cooperation.

Referring to the talks in Vienna and the US inclination to rejoin the deal, he said that in Moscow’s idea, the only way to solve the issue is US unconditional return to the JCPOA with full implementation of the UNSCR2231 and its commitments.

Lavrov also said that it is not useful to want Iran to accept new conditions in the framework of the JCPOA and act beyond its commitments, adding that any complementary or additional document about regional or military issues can be discussed out of the JCPOA and in line with providing the security of the region and the Persian Gulf in the presence of the regional countries.

The Russian foreign minister also stressed expanding and deepening the relations between Tehran and Moscow and reminded that his country is serious in implementing agreements in line with the enhancement of relations and will pursue the joint projects with speed and seriousness.