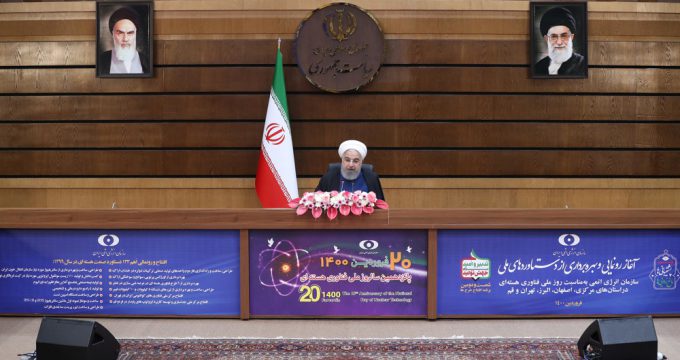 Iran has unveiled 133 new nuclear achievements made by the country’s experts in different areas of the nuclear industry, including quantum, enrichment, heavy water and deuterium compounds, radiopharmaceuticals, lasers, and etc.

In a video conference call on Saturday, President Hassan Rouhani unveiled the nuclear achievements in the provinces of Tehran, Markazi, Isfahan, Alborz and Qom to mark the 15th anniversary of the National Nuclear Technology Day.

Iran showed to the world the peaceful nature of its nuclear program by signing the Joint Comprehensive Plan of Action (JCPOA) with six world states — namely the US, Germany, France, Britain, Russia and China — in 2015. The nuclear deal was also ratified in the form of a UN Security Council Resolution 2231.

However, Washington’s exit in May 2018 and the subsequent re-imposition of unilateral sanctions against Tehran left the future of the historic agreement in limbo.

As the European parties failed to do so, Tehran moved in May 2019 to scale down its JCPOA commitments under Articles 26 and 36 of the agreement covering Tehran’s legal rights.

Addressing Saturday’s event, Rouhani said one of the honorable effects of the JCPOA was that it completely legalized the nuclear industry in Iran.

“I reiterate that all our nuclear activities are peaceful and for civilian purposes. As Leader [of the Islamic Revolution Ayatollah Seyyed Ali Khamenei] has repeatedly stated, in our religion, pursuing a weapon that can be a great danger to a large community is forbidden,” he noted.

The president also thanked Ali-Akbar Salehi, head of the Atomic Energy Organization of Iran (AEOI), and the staff of the organization, for the 133 nuclear achievements made over the past year.