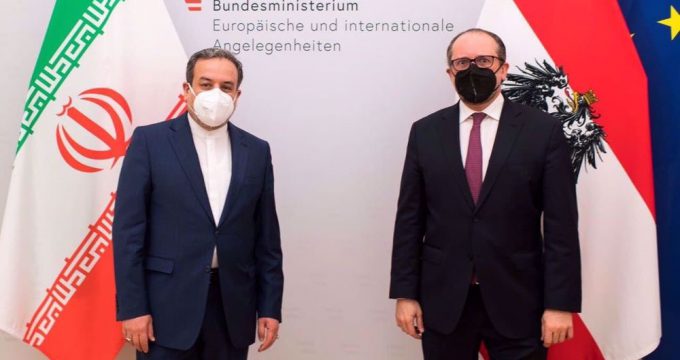 Austrian Foreign Minister Alexander Schallenberg says Vienna is ready to make all efforts to provide an appropriate atmosphere for talks aimed at preserving a landmark nuclear deal signed between Iran and major world powers in 2015.

Schallenberg made the remarks in a meeting with Iranian Deputy Foreign Minister Abbas Araqchi, who is in the Austrian capital at the head of a delegation to hold talks with representatives of the remaining parties to the nuclear deal, officially known as the Joint Comprehensive Plan of Action (JCPOA).

The top Austrian diplomat said the preservation of the JCPOA would be to the benefit of all sides.

In 2015, Vienna hosted the signing ceremony of the nuclear accord between Iran and six major world states — Russia, China, the US, France, Britain plus Germany.

Three years later, however, the US under ex-president Donald Trump pulled out of the deal and re-imposed the anti-Iran sanctions lifted by the JCPOA. Trump’s administration also targeted Iran with a set of non-nuclear sanctions as part of its so-called “maximum pressure” campaign devised to coerce the Islamic Republic into giving more concessions to the West under a “better deal” that would also cover issues unrelated to the Iranian nuclear program.

Now, the administration of new US President Joe Biden — who was vice president when the JCPOA was clinched — has acknowledged the defeat of Trump’s pressure policy and expressed a willingness to return his country to the JCPOA.

However, his administration has so far failed to undo Trump’s wrongdoings in practice, sending mixed signals on how the US would resume its contractual obligations and saying Iran should first stop the remedial steps it has been taking away from the deal under Article 36 of the JCPOA.