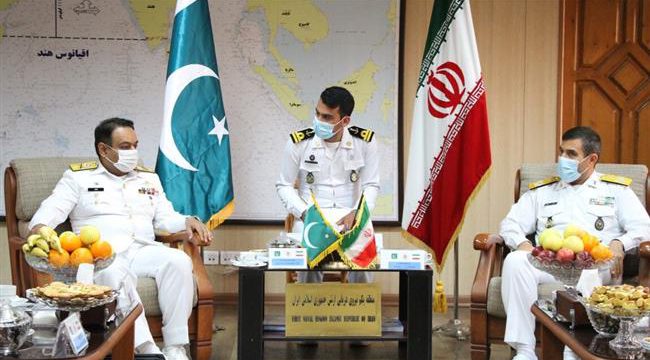 Only regional countries can guarantee security of Strait of Hormuz: Iranian CMdr.

Commander of Iranian Army’s first zone Rear-Admiral Jaafar Tazakkor says that sharing maritime information and knowledge carries a message that security and peace in the southern strategic Iranian region, Strait of Hormuz, and the Indian Ocean.

Rear-Admiral Tazakkor made the remarks in a meeting held in south of Iran on Monday with Khan Mahmood Asif, commander of Pakistani flotilla which docked at a harbor in Bandar Abbas two days ago.

Rear-Admiral Tazakkor said, aim behind interaction between the two countries’ naval forces is to strengthen military relations and reach agreement on a method to design and stage maritime drills.

The Pakistani commander, for his part, said exchange of naval delegations will lead to deepening friendly ties.

The two can also share experiences during the visits, Commander Asif added.

The two commanders said that they gave importance to establishment of security in the Persian Gulf as the main global way.

Pakistan attaches great importance to its relations with Iran, he underlined.

Pakistani flotilla carries a message of peace, solidarity and friendship for the Islamic Republic of Iran and the region as well, Rear-Admiral Tazakkor said.