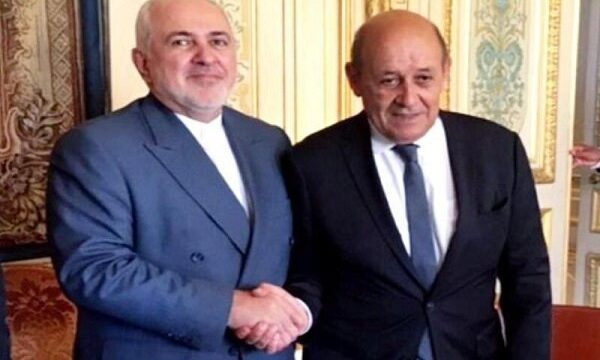 “In a telephone call with French FM @JY_LeDrian today I urged France to show a constructive stance on the JCPOA in next week’s meeting in Vienna. I called on France to honor its commitments under the accord, and to cease abiding by illegal sanctions imposed by the US,” Zarif tweeted. 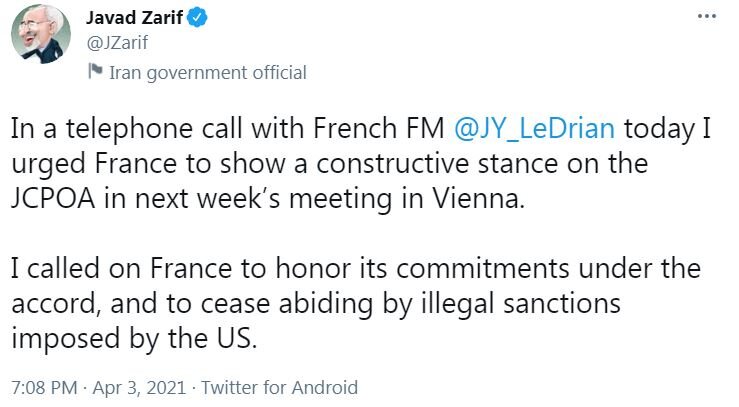 For his part, Le Drian stressed the resumption of the JCPOA talks and the role of the E3 in maintaining the nuclear deal.

The French FM urged Tehran to take constructive steps to implement JCPOA commitments, without mentioning US non-constructive actions and E3 unfulfillment to the deal.

He added that the negotiations should proceed in a way that would pave the way for a full return to the obligations of the JCPOA.

He claimed that France would be pragmatic and demanding in the negotiation process.

“I call on Iran to refrain from further deviations from its obligations under the JCPOA, that may undermine the dynamism of the negotiations,” he said, adding that all parties are inclined to have talks lead into fruitful results.

Paris calls on Iran to take a constructive political stance in the upcoming talks, ignoring the fact that it was the United States that violated UN Security Council Resolution 2231 in May 2018 and unilaterally withdrew from the JCPOA.

The quarterly meeting of the Joint Commission of the JCPOA was held in a video conference on Friday and delegations from Iran and 4+1 (E3+China and Russia) attended the meeting, discussing the latest developments regarding the deal.

The online conference was chaired on behalf of EU High Representative Josep Borrell by the Deputy Secretary-General and Political Director of the European External Action Service Enrique Mora.

Participants agreed to hold another meeting on Tuesday in person in Vienna.