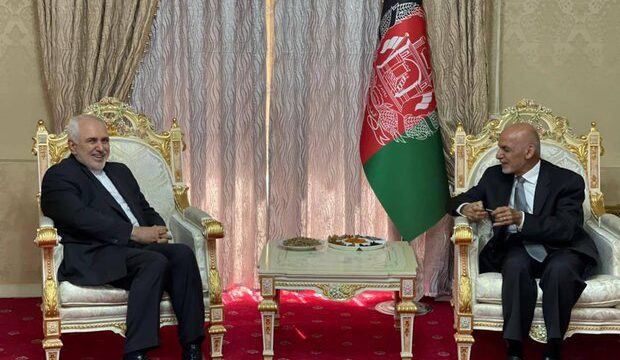 The foreign minister, who is in Tajikistan to attend the Heart of Asia Conference, discussed the peace process in Afghanistan, regional issues and bilateral relations with Afghan President Ashraf Ghani on Tuesday afternoon.

In the meeting, the President of Afghanistan, appreciating the positions of the Islamic Republic of Iran on the developments in Afghanistan, announced his country’s readiness to expand relations in all areas and to hold a joint commission for economic cooperation between the two countries.

The future of peace in Afghanistan and Iran’s position in helping to establish peace and stability in the Islamic Republic of Afghanistan were other topics discussed during the meeting.

Also during a trilateral meeting of the Foreign Ministers of the Islamic Republic of Iran, Afghanistan and Tajikistan, Zarif emphasized the importance of cooperation between the three countries in creating integration and stability in the region, and announced Iran’s readiness to start cultural cooperation in the form of an action plan.

The previous meetings of the Heart of Asia conference have been held from 2011 to 2019 in Istanbul, Kabul, Almaty, Beijing, Islamabad, Amritsar, Baku and Istanbul.

The Heart of Asia Conference was held from 2011 to 2019 in Istanbul, Kabul, Almaty, Beijing, Islamabad, Amritsar, Baku and Istanbul.

Foreign Minister Mohammad Javad Zarif left for Tajikistan on Sunday evening to attend the conference and meet with Tajik officials.