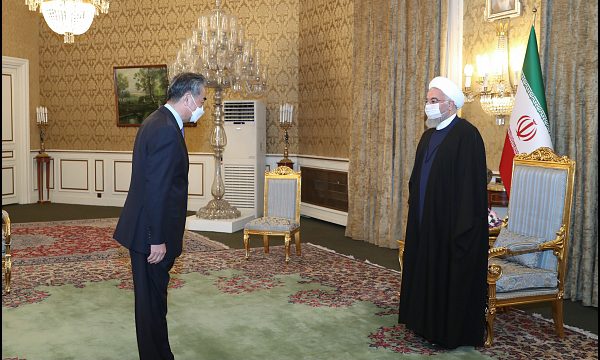 President Rouhani said on Saturday that Iran’s relations with China are important and strategic and stressed the development and expansion of long-term cooperation between the two countries in every field.

President Rouhani made the remarks in a meeting with Chinese Minister of Foreign Affairs Wang Yi who arrived in Tehran on Friday (March 26) afternoon.

Rouhani said that Tehran and Beijing have very good ties and their shared stances on international issues are evidence of that.

Referring to the 50th anniversary of diplomatic relations between Iran and China, as well as bilateral, regional, and international collaborations, President Rouhani stressed acceleration of implementing agreements on infrastructural and developmental projects.

Appreciating Beijing for supporting Iran in international communities, countering US unilateralism and excessive demand, and condemning the US sanctions against Iran, he said that cooperation between Tehran and Beijing is important for the implementation of the Joint Comprehensive Plan of Action (JCPOA), and European’s commitments to the deal, and can change the existing conditions.

President Rouhani also condemned the US interventionist measures in the region and stressed all-out efforts to counter-terrorism and extremism in the region.

Referring to the Hormuz Peace Endeavor (HOPE), proposed by Iran, Rouhani said that the main destabilizing element in the region is the US military presence.

He also called for the expansion of cooperation between the private sectors of Iran and China.

President Rouhani also said that Iran is willing to purchase more COVID-19 vaccine from China, adding that the two countries should share their experiences, especially in making the vaccine, in countering the pandemic.

Hoping that the trade exchange deficit between Iran and China will be compensated in 2021, Rouhani said that Iran will keep China as a big commercial partner and have more joint investments and cooperation with the country.

Chinese Minister of Foreign Affairs Wang said in the meeting that China has always given great importance to relations with Iran and despite some issues, it has tried to prioritize the issue.

Saying that China has always opposed US excessive demand and unilateral sanctions, Wang added that the maximum pressure is illegal and anti-humane and lacks international support.

He also said that the JCPOA is a multi-faceted achievement of multilateralism, and added that it should be fully implemented.

Wang noted that the US withdrawal from the deal was against international regulations and that the new US government wants to reconsider that and return to the deal, which is welcomed by China.

The US should return to the 2015 agreement and make a commitment that such measures will not be repeated in the future, he said.

He went on to say that China supports HOPE and said that the US and other world powers’ interferences make the region insecure and disrupted.

Regarding the COVID-19 vaccine, Wang said that China stands by Iran in providing the doses and will definitely have effective cooperation with Iran in this regard.

“Based on the agreements, China will provide Iran with more vaccine and that Iran is a priority for China in the issue,” the Chinese foreign minister added.