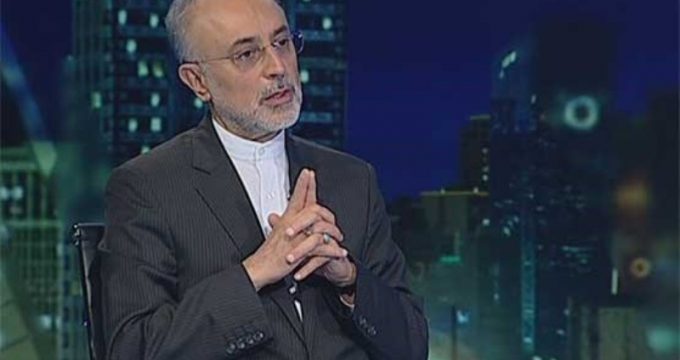 The head of the Atomic Energy Organization of Iran (AEOI) has once again dismissed claims that the country seeks nuclear bombs, saying the fatwa (religious decree) issued by Leader of the Islamic Revolution Ayatollah Seyyed Ali Khamenei against weapons of mass destruction sets Iran’s course of action.

In an interview on Tuesday with the Public Broadcasting Service (PBS), an American public broadcaster and television program distributor, Ali-Akbar Salehi was asked whether anyone in the Iranian government ever raises the issue of the benefits of nuclear bombs as “effective deterrence” against nuclear-armed powers, despite the country’s official assertion that its nuclear work has no military dimensions.

“You see, the final wording on this is by the Supreme Leader. Once the Supreme Leader has issued the fatwa, that fatwa is not only a religious fatwa, but it is something, a decree,” he replied. “It’s not that no one can say. You can speak your mind. I mean you can you speak whatever you wish. But, in reality, when it comes to action, we do what the fatwa says. We do what the decree says.”

Ayatollah Khamenei’s fatwa bans the production, possession and stockpiling of nuclear weapons and other weapons of mass destruction.

Iran’s nuclear chief also drew a distinction between a nuclear bomb and a long-range missile, saying the latter is used to “hit the places that you wish to hit.”

“But nuclear bomb, as it was used in Hiroshima and Nagasaki, inflicted harm on innocent people; 200,000 lives were evaporated in matters of seconds,” he added.

Elsewhere, Salehi complained that although US President Joe Biden has “promised to sort of come back to the JCPOA, … he has not yet delivered” on that promise.

He was referring to the Joint Comprehensive Plan of Action, the nuclear deal that Iran signed with six world states — namely the US, Germany, France, Britain, Russia and China —  in 2015 to show to the world the peaceful nature of its nuclear program.

Three years later, however, former US president Donald Trump unilaterally pulled his country out of the JCPOA and reinstated the anti-Iran sanctions that had been lifted by the accord.

The new US administration, under President Joe Biden, has indicated its willingness to rejoin the JCPOA, but conditioned that on Tehran’s resumption of the commitments it has suspended under the accord in response to the US withdrawal and the other parties’ failure to meet their end of the bargain.

But Tehran says Washington should unconditionally remove all the sanctions imposed under Trump in a verifiable manner before it returns to full compliance with the JCPOA.

Salehi said Iran’s nuclear issue is “not really complicated,” and that “the one who has left the JCPOA has to come back first.”

“We have already the deal, the JCPOA deal. It’s a deal that was negotiated for over two years. And the US administration at one time felt that they want to leave the deal. You are the one who has left the deal, and you have to come back to the deal, and then we sit on the table within the framework of the 5-plus-one and talk whatever issues that are deemed to be talked about,” he said.

The measure adds to Iran’s previous steps away from the JCPOA.