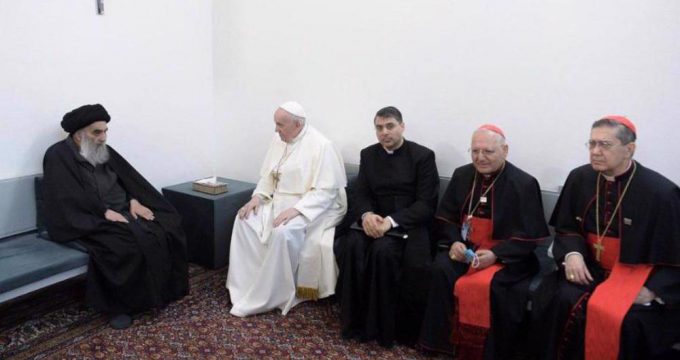 Iran says the recent visit by Pope Francis to Iraq, where he met with Grand Ayatollah Ali al-Sistani, shows security has returned to the Arab country, thanks to “the bravery of the Iraqi people and the wisdom of its religious leadership”.

“The message that is conveyed by this trip and similar trips is that Iraq is secure and that calm has returned” to the country,” Iranian Foreign Ministry spokesman Saeed Khatibzadeh said Monday.

“The very essence of this journey is that Iraq, owing to the bravery of the Iraqi people and the wisdom of the religious authority and the pure blood which was shed against extremism and foreign conspiracies, has become a safe haven where such a good and constructive journey can be made.”

Pope Francis concluded his four-day journey to Iraq on Monday. He was accompanied by President Barham Salih to his flight.

The pontiff met with Iraq’s senior Shia cleric Grand Ayatollah Ali al-Sistani on Saturday, following which two statements were released by their offices, which caught the attention of many observers.