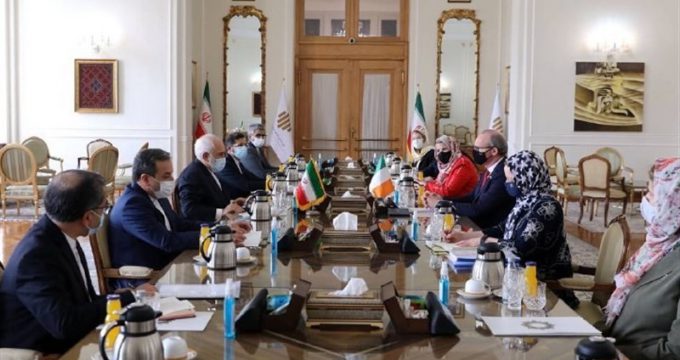 Ireland to reopen embassy in Iran

Senior Iranian and Irish diplomats made arrangements for the reopening of the European country’s embassy in Tehran.

In a meeting in Tehran on Sunday, Iranian Foreign Minister Mohammad Javad Zarif and his Irish counterpart Simon Coveney discussed a range of regional and international issues, as well as the arrangements for the gradual reopening of Ireland’s embassy in Tehran.

They also emphasized the need to continue political consultations as well as economic exchanges between Tehran and Dublin.

Highlighting Iran’s principled policy on the need for the removal of the illegal US sanctions, Zarif said Tehran will reverse the measures it has adopted to scale down its obligations under the 2015 nuclear deal, known as the Joint Comprehensive Plan of Action (JCPOA), once the sanctions are lifted fully and effectively.

The two diplomats also talked about the developments in the Persian Gulf, Yemen, Iraq, Syria, Lebanon, Palestine, Afghanistan and the Caucasus, and weighed plans to help ease regional tensions.

Ireland embassy in Tehran March 8, 2021
Iran has no direct or indirect contact with US
Pope’s visit shows Iraq secure thanks to resistance: Iran