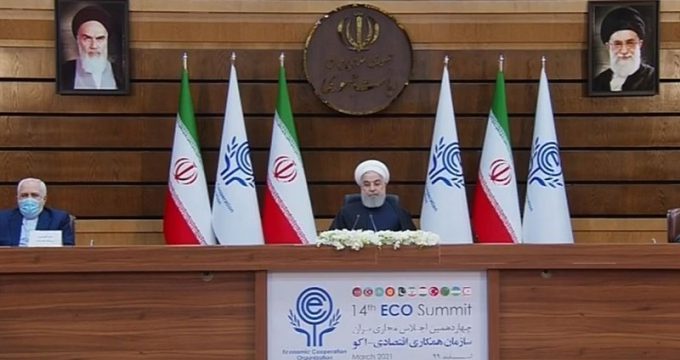 The president on Thursday delivered a speech to the 14th summit of the Economic Cooperation Organization, held via videoconference.

In his address to the summit, held to discuss “regional economic cooperation in the aftermath of COVID-19”, Rouhani hailed ECO as a successful model of regional convergence.

He also called for efforts to find new ways to broaden intra-organizational trade exchanges among the ECO members.

Calling for plans to carry out ECO goals and accelerate the implementation of its trade agreements, President Rouhani proposed the idea of activating and supporting ECO subsidiary organizations, such as the ECO bank, insurance, standards, and chamber of commerce.

Rouhani further emphasized the necessity of removing the obstacles to cooperation among the ECO states in the transportation industry.

Pakistani Prime Minister Imran Khan opened the summit in his capacity as the chair of the 13th summit, held in Islamabad in March 2017.

Iran, Pakistan and Turkey are the founding members of ECO, established in 1985. Afghanistan, the Republic of Azerbaijan, Kazakhstan, Kyrgyzstan, Tajikistan, Turkmenistan and Uzbekistan joined the organization later.