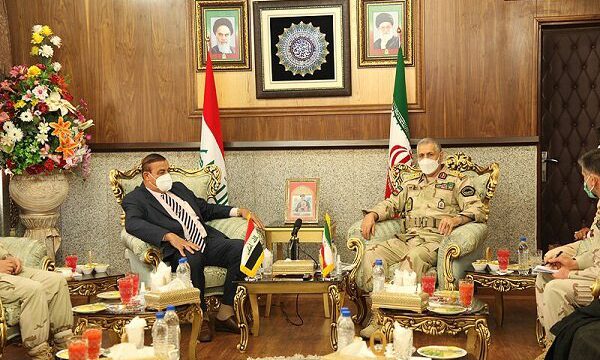 Commander of the Border Guards of the Islamic Republic of Iran Police met and held talks with Commander of Iraq’s Border Police on the expansion and strengthening of border cooperation.

During a meeting with the Commander of Iraq’s Border Police General Hamid Abdullah Ibrahim, Brigadier-General Ahmad Ali Goudarzi said, “The Islamic Republic of Iran has 15 neighboring countries and has the most common borders with its neighbors in the world after Russia and China, which are controlled and managed in the spirit of friendship between the countries of the region.”

“We hope that in this meeting, which is held with the aim of exchanging information and using the border capacities between the two countries to ensure lasting border security, we will be able to make the most of and transfer experiences to improve the border situation,” he added.

Referring to the security of the borders and the efforts of the border guards to prevent the entry of drugs into the country,  Goudarzi said, “Since the beginning of the Iranian year [March 20, 2020], about 130 tons of various drugs have been confiscated in the borders of the Islamic Republic of Iran.”

He also pointed to the favorable interaction and good border relations between the border guards of Iran and Iraq, saying, “The Islamic Republic of Iran has a 1609-kilometer border with Iraq, and this huge volume of the common border is well controlled and managed by the favorable relations and interaction that is established between the border guards of the two countries.”

Stating that Iran and Iraq have common enemies, he added, “The Islamic Republic of Iran faces many threats around its borders and will confront arrogance, takfiri and terrorism elements at the borders.”

Emphasizing that the border police force pays special attention to fighting insurgent groups, armed miscreants, and weapons and ammunition smugglers at the borders, Goudarzi highlighted, “We expect the Iraqi border to cover the border gaps and to be active in combating the smuggling of weapons, ammunition and anti-cultural items.”

Hamid Abdullah Ibrahim, for his part, stressed the need to transfer experiences and information interaction between the two countries’ border guards, saying, “Equipping and blocking Iraq’s borders is on the agenda so that we can use these components and transfer experiences to fight terrorism, insurgent groups, smuggling weapons and ammunition, and anti-cultural items.”

Iran-Iraq border cooperation March 2, 2021
IAEA inspections should not be used as bargaining chip: Grossi
US talk of diplomacy unacceptable while sanctions in place: Iran spox