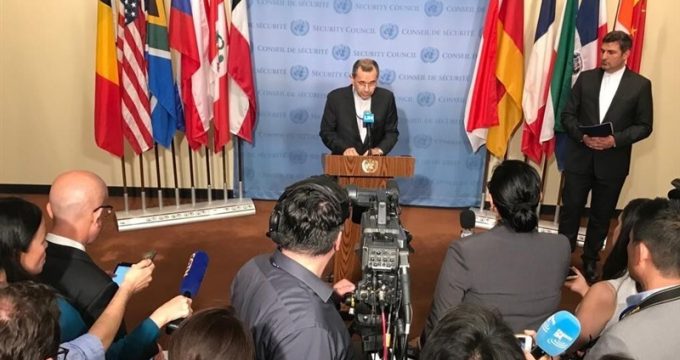 Iran says not interested in escalation of tensions with US

Iran’s ambassador to the United Nations says Tehran is not interested in escalation of tensions with the United States, and unlike Washington, the Islamic Republic has no interest in making provocative moves.

Majid Takht-Ravanchi said the Islamic Republic of Iran has proved that it is not interested in escalation of tension, even during the tenure of the Trump administration that started the tension and provocative moves.

The Iranian envoy made the remarks in response to Al Jazeera’s question about possible escalation of tensions as a result of Tehran’s moves to scale down its commitments under the 2015 nuclear deal with world powers, officially known as the JCPOA.

He said the moves made by Iran in reaction to the failure of other JCPOA parties in living up to their commitments cannot result in escalation of tensions.

“When the Trump administration decided to leave the JCPOA, the remaining parties to the JCPOA asked us not to adopt a stance similar to that of Trump. They said they will compensate for the damages caused by the Trump administration’s withdrawal from the deal. We waited for a year, but we didn’t get anything from their promises, and it was just an empty promise,” he said.

Therefore, the envoy added, Iran had no other choice if it wanted to create a balance in the nuclear deal, and thus started to take certain measures in that regard.

“Recently, when our Parliament witnessed that the other parties to the JCPOA are not serious about making up for our damages, and that the E3 is not willing to fulfil its commitments, it decided to … pass a law that obliges the administration to take measures like increasing uranium enrichment.”

“What we did was based on the Paragraph 36 of the nuclear deal, and was in line with our commitments based on the text and spirit of the JCPOA,” he added.

“It wasn’t Iran that sent arms to a region far far from its territory; it was rather the US that sent arms and warships to our region, which is 7,000 miles away from America,” he said.

“All these provocative moves, including the assassination of our dear general Martyr Soleimani which was a very provocative terrorist attack, were made by the US. Iran hasn’t had and still doesn’t have any interest in making provocative moves,” Takht-Ravanchi said.

No need for Qatar’s mediation

When asked about Qatar’s bid to mediate between Tehran and Washington, Takht-Ravanchi said the US return to the JCPOA needs no mediator.

“We have good relations with our Qatari brothers. Qatar is a totally friendly country, but we believe the US must return to its commitments in full, and that’s what needs to be done. Therefore, it needs no mediator.”

Takht-Ravanchi said the US implementation of its commitments does not even need any negotiation.

“It is up to the US to decide whether it wants to fulfil its commitments or not. The implementation of their commitments does not need any negotiation. The US needs to make the necessary decisions,” he added.

He said the US administration is well aware the sooner it returns to its JCPOA commitments, the better.

“The best way is that the US returns to its commitments, and then Iran will do the same. In that way, talks can be held on the JCPOA-related issues within the P5+1 platform. This is an easy and diplomatic way, and I think this solution can be easily achieved,” he added.

The former US administration unilaterally abandoned the nuclear deal, formally called the Joint Comprehensive Plan of Action (JCPOA) in May 2018, and unleashed what his team called a “maximum pressure campaign” with the stated objective of forcing Iran to negotiate “a better agreement.”

The Islamic Republic refused to bow down to pressure and threats and responded to Trump’s maximum pressure policy with “maximum resistance.”

US President Joe Biden has expressed a willingness to bring the US back to the nuclear accord. However, his administration is demanding to see changes from Tehran before Washington would consider lifting the sanctions, as demanded by Iran.