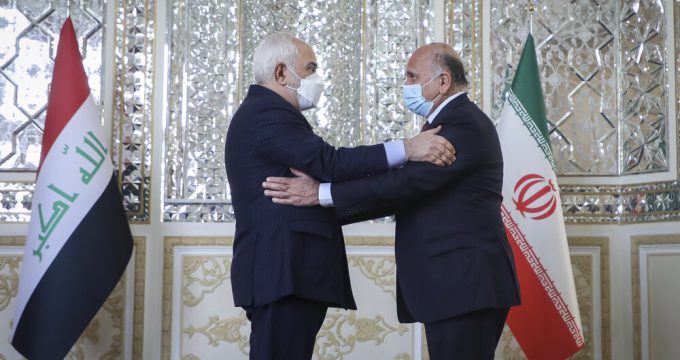 Iranian Foreign Minister Mohammad Javad Zarif in a meeting with his Iraqi counterpart Fuad Hussein in Tehran on Saturday said that some recent attacks and developments in Iraq are suspicious and could be carried out to disrupt Tehran-Baghdad relations and Iraq’s security and stability.

Zarif stressed Iraqi government’s measure to find the perpetrators of the event.

Zarif and Fuad Hussein discussed political, economic, and border trade cooperation, according to the public relations office of the Ministry of Foreign Affairs.

Condemning the US dangerous attack on Iraqi forces along the borders with Syria, Zarif said that the attacks were illegal and a violation of Iraqi sovereignty.

Regarding the issue of Iranian fuel tankers in Tamarchin, northwestern Iran, Zarif hoped that the problem will be solved with cooperation between the two neighboring countries.

He also urged the officials of Iran and Iraq to start and complete the Shalamcheh-Basra railway as soon as possible.

In the meeting with Zarif, the Iraqi foreign minister stressed all-out expansion of ties and expressed Baghdad’s readiness to boost relations with Iran.

Fuad Hussein referred to the negotiations between the two countries about Tehran’s access to its financial sources in Iraq and stressed facilitation of the process.

He went on to say that Baghdad does not let its good relations with Tehran be disrupted.

Iran-Iraq ties, US airstrike on Syria February 27, 2021
Tehran strongly condemns US airstrikes in Syria
Iran not to allow resurgence of takfiri terrorism in region