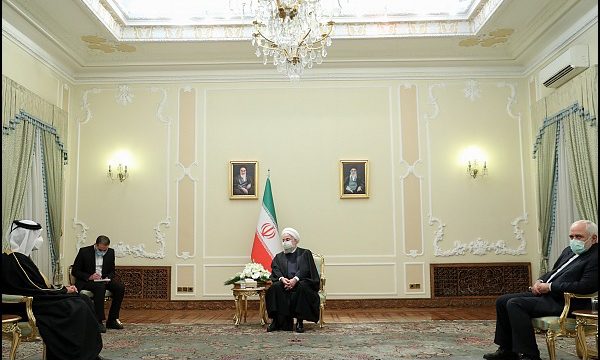 In a meeting with visiting Qatari FM, Iranian President Hassan Rouhani said, “Iran believes that peace and stability in the region will be achieved with the cooperation and collaboration of countries in the region ONLY.”

Speaking in his meeting with visiting Qatar’s Deputy Prime Minister and Foreign Minister Mohammed bin Abdulrahman al-Thani on Monday, Rouhani pointed to the recent developments in the region and the need to develop joint cooperation between Tehran and Doha and stated that the amicable ties between Iran and Qatar is moving towards progress and development.

Elsewhere in his remarks, Rouhani pointed to the agreements reached during the Emir of Qatar’s visit to Iran last year and the agreements made in Iran and Qatar Joint Economic Commission and emphasized the need for accelerating implementation and operation of these agreements.

The two countries of Iran and Qatar enjoy high capability and potential and can expand cooperation in various fields of economy, trade, culture, science, tourism, so that the private sectors of the two countries play an important role in this regard, Rouhani stressed.

Qatari foreign minister, for his part, described Islamic Republic of Iran as a friend country in the region and emphasized the need for developing and deepening bilateral relations in all fields especially trade and economic cooperation.

After submitting a written message of Emir of Qatar to President Rouhani, Qatari Foreign Minister termed Iran as a powerful and influential country in the region and stressed the need for cooperation and collaboration of countries of the region and Persian Gulf to settle existing problems.