Foreign Minister Mohammad Javad Zarif has criticized a statement by the European trio that urges Iran to return to the nuclear deal obligations without referring to the other JCPOA parties’ non-compliance.

“Have our E3 partners ever read para 36 of JCPOA & Iran’s many letters on that basis?

By what logic is the onus on IRAN to stop its remedial measures undertaken a full year after the US withdrew from—and continues to violate—the JCPOA?

What have E3 done to fulfill their duties?”

The top diplomat’s tweet came in reaction to a joint statement issued by Germany, France, and Britain earlier on Friday, in which they expressed concern over the start of producing metal uranium by Iran. 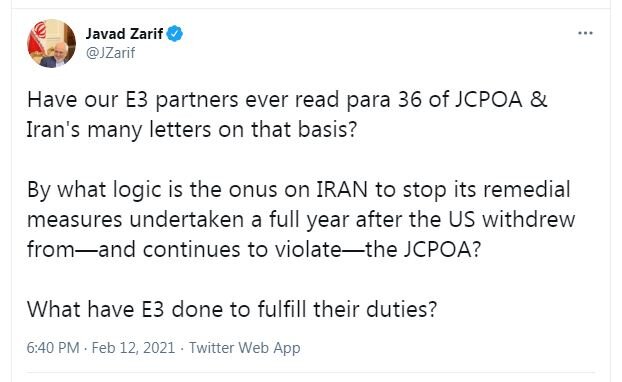 Parts of the statement reads, “We, the governments of France, Germany and the United Kingdom, note with grave concern the recent confirmation by the IAEA that Iran is producing uranium metal in violation of the JCPoA. Under the JCPoA, Iran committed not to engage in producing or acquiring uranium metal or to conduct research and development on uranium metallurgy for 15 years.”

“Recalling our statement of January 16, we reiterate that Iran has no credible civilian justification for these activities, which are a key step in the development of a nuclear weapon,” their statement further reads.

However, the European trio failed to mention their lack of commitment to serve Iran’s interests under the deal, while they continue to disregard Tehran’s demands.

After the illegitimate US exit from the JCPOA in May 2018, the three European signatories to the deal remained indifferent to making up for Iran’s losses.

Amid the Europeans’ lack of action, Iran took 5 steps to reduce its commitments to the deal while vowing that it will reverse the course as soon as the other parties live up to their commitments under the accord.