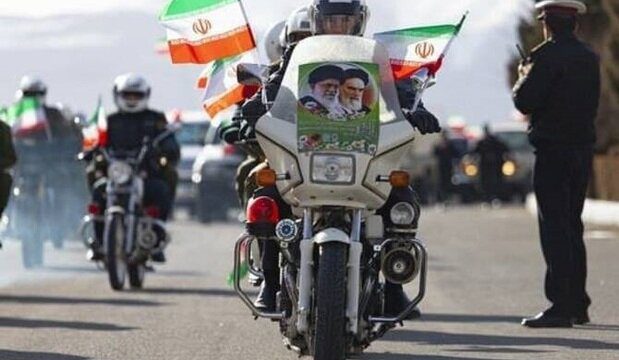 Rallies for marking the 42nd anniversary of the victory of the Islamic Revolution are being staged across Iran. People are participating in the rallies using their motorcycles and cars to observe health protocols necessary to prevent the further spread of coronavirus pandemic.

People from all walks of life are holding massive rallies in different cities and towns across Iran on Wednesday to celebrate the 42nd anniversary of the victory of the Islamic Revolution in 1979.

For the first time, drive-in rallies are held amid the country’s COVID-19 pandemic.

This year’s rallies are held as the Iranian authorities have imposed strict measures to prevent a new wave of the outbreak as the number of infections and deaths have kept decreasing since the new measures were introduced in the middle of last autumn. The Iranian health officials have asked the people to celebrate this year’s revolution anniversary inside their cars.

According to a statement by the Coordination Council for Islamic propagation, rallies of cars and motorcycles will be held in Tehran on 12 routes leading to Azadi Square. Also, a ceremony will be held in Azadi Square without the presence of the crowd, and all speeches and readings of the final communiqué will be broadcast on Iranian state TV.

This year’s rallies are also scheduled to take place in cyberspace, so people can register their presence and choose slogans and posters by visiting the internet website “fajr.ccoip.ir.”

On, February 11, 1979, the nation’s Islamic Revolution against the former US-backed Pahlavi regime became victorious. The revolution was led by the late Imam Khomeini (RA).

Unlike this year, in previous years in the capital Tehran, the Iranian president would address the demonstrators at Azadi Square, with senior officials also joining the marches in capital Tehran.