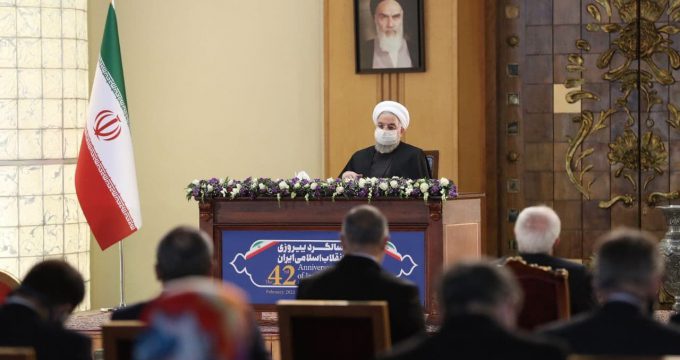 Pres. Rouhani says no one should expect Iran to take first commitment step

President Hassan Rouhani said on Tuesday that the US’ and Europe’s lack of loyalty to their nuclear deal commitments was the reason Iran reduced its own commitments and that no one can expect anything from Iran because it will not take the first step.

Speaking in the congratulatory ceremony of the foreign ambassadors on the anniversary of the victory of the 1979 Islamic Revolution, President Rouhani said that Iran has in the past 42 years been voicing peace, stability, and negotiations for reaching friendship with other countries.

Iran fought two wars over past 42 years and was victorious in both – one was imposed by Saddam, the other by Trump. The former is consigned to oblivion and nothing is left for him except disgrace and dishonor; and the latter has no name left.

The year 2020 was a hard one for every one, but was especially hard for Iran because all nations were free to use their money to buy medical equipment, food, and medicine and vaccine, except Iran whose financial resources were blocked due to US oppressive and illegal sanctions.

He also said that COVID-19 pandemic was a test of humanity and cooperation for the world, in which US President Donald Trump’s administration failed.

The current US administration of the US has done nothing especial so far either, he said, adding that Iranian people passed the test; they produced COVID-19 medical equipment and medicine inside Iran and are exporting some of them.

Three big Iranian institutes have received permit to carry out clinical tests of their vaccine, said the President, adding that vaccination started in Iran today and that Iran will produce domestic COVID-19 vaccine in the coming months.

Regarding the Joint Comprehensive Plan of Action (JCPOA), he said that the International Atomic Energy Agency confirmed in 15 reports that Iran has been loyal to its commitments.

But the US withdrew from it and other signatories of the deal failed to do their commitments, Rouhani said, adding after a year Iran started to reduce its commitments step by step.

Rouhani went on to say that whenever 5+1 counties do their commitments, Iran will return to its own commitments.

He added that the US that has left the deal and has acted against international rules for three years should take the first step.

Referring the conditions in the region, Rouhani said the region should be in peace and stability.

When a country asked for help, Iran helped them; Iraq, Syria, Afghanistan, and Lebanon are the witnesses, he said.

Who gave the region to the terrorists for years? Who spent billions of dollars to interfere in the region? Why did they financially back the terrorists and provide arms for them? Why have the US and Europe provided weapons for the country that has attacked Yemen and do they still keep doing so? President Rouhani asked.

Iran is a victim of terrorism, weapons of mass destruction, and chemical weapons. When Iraq was fighting terrorism, Iran was the first one that stood by them to fight the terrorists. General Qasem Soleimani and Abu Mahdi al-Mohandes fought Daesh terrorists and were assassinated by Trump’s direction, he said.

He also referred to Iran’s proposal at the UN in 2013 establishment of a world free of violence and extremism and also the Hormuz Peace Endeavor (HOPE), and added that Iran is ready to negotiate with Iraq and the six states in the south of the Persian Gulf to solve the issues and problems based on UNSC Resolution 598.