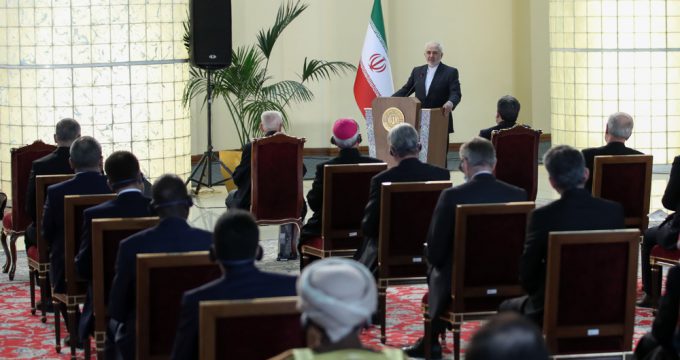 oreign Minister Mohammad Javad Zarif says the Iranian people respond to pressure and threats with resistance, and that anyone who threatened the nation ended up in the dustbin of history.

“Today is the day to convey this message to the world that the Iranian people will answer respect with respect and they will respond with resistance when faced with threats and pressure,” Zarif said during a Tuesday meeting of President Hassan Rouhani and foreign ambassadors residing in Tehran on the eve of the 42nd anniversary of the Islamic Revolution.

“Whoever threatened this people throughout history has joined the dustbin of history,” he added.

Zarif said the Iranian people stood against the “economic war and economic terrorism” waged by former US President Donald Trump, adding, “Those who waged war against this nation eventually waged war against their own nation, too, and then went to the dustbin of history. This may be the best lesson for the future.”

“This is a lesson for the new US administration and for all countries to know how to behave towards this great people,” the top Iranian diplomat stated.