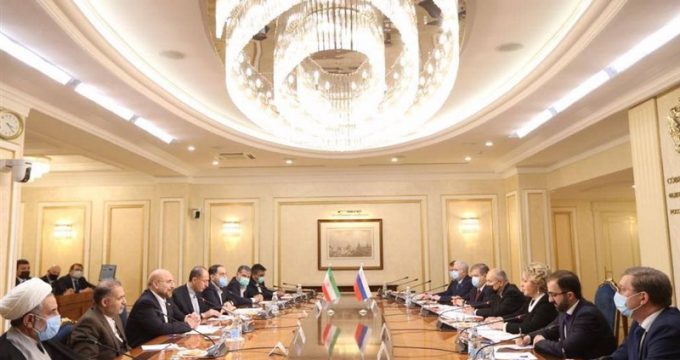 The speaker of the Iranian Parliament said a message he has passed on from Leader of the Islamic Revolution Ayatollah Seyed Ali Khamenei to Russian President Vladimir Putin implies that Tehran and Moscow will maintain strategic ties under 20- and 50-year agreements.

In a meeting with Chairwoman of the Federation Council of Russia Valentina Matviyenko, held in Moscow on Monday, Iranian Parliament Speaker Mohammad Baqer Qalibaf said his visit to Russia has become special since he carries a message from Ayatollah Khamenei to Putin.

“This important message is about the region and the world powers and has the meaning that the bilateral relation between Iran and Russia will be strategic and deep for several decades. What is planned is that the agreements and decisions between the two countries would continue on the basis of 20- and 50-year deals,” the Iranian speaker added.

He also emphasized that political developments in the countries with “hegemonic and unilateral” policies will never affect the deep-rooted, strategic, and continuous relations between Iran and Russia.

In order for such strong ties to continue, Iran and Russia need to promote cooperation in the economic, political, cultural, scientific, defense, security, energy, and transportation fields, Qalibaf added.

For her part, Matviyenko said the visit to Russia by Qalibaf, whom she described as a prominent and seasoned political figure, would give fresh impetus to the relations between the two states.

Congratulating Iran on the 42nd anniversary of the victory of the Islamic Revolution, the Russian chairwoman said Iran is an old and close partner of Russia.

One of the biggest friendship groups in the Federation Council of Russia is the one working with Iran, she noted, adding that Moscow is eager to expand multilateral relations irrespective of the developments in the world.

The top Iranian lawmaker arrived in Moscow on Sunday for talks with senior Russian officials.